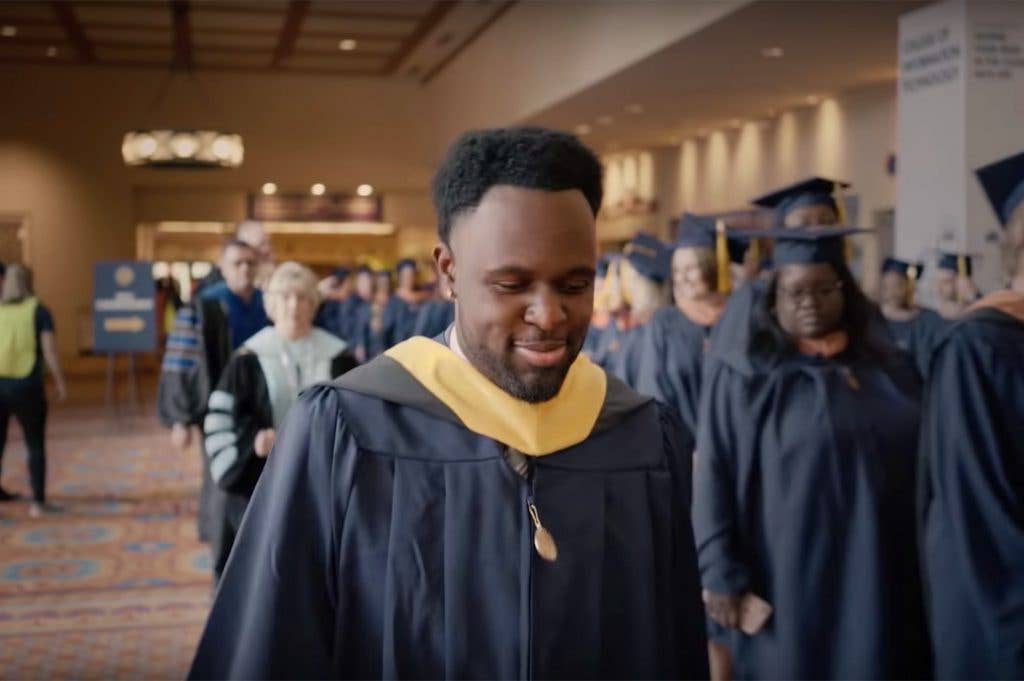 "Diagnosed with ADHD and seen by his teachers and peers as “a troubled kid” growing up, Rashaan spent much of his childhood believing those dismissive words. He trudged and struggled through grade school and made it to the ninth grade before dropping out.

The ranks of successful people throughout history are full of men and women who very well could have given up because of failures and struggles in their early lives — and the cruel words of authority figures who doubted their potential.

For Rashaan, who spent years as a dishwasher in restaurants after failing to complete high school, that motivation came from having a strong example of perseverance to look up to: his mother, who worked full time and attended college while suffering the pain of lupus.

Years later, at the commencement ceremony celebrating his master’s degree, Rashaan — who was invited to be one of the ceremony’s speakers — remembered watching Mom keep going. With tears in his eyes, his voice breaking, and the audience applauding and cheering, Rashaan said, “I thought to myself, ‘If she isn’t giving up, how can I?’”

That’s not to say that sticking with it was easy. While enrolled in his degree programs — first a B.S. Business — IT Management undergraduate program, then a master’s program in Cybersecurity and Information Assurance, both at Western Governors University — he faced a number of hardships. He was unemployed on four separate occasions. He was evicted from his home. His father died five months before Rashaan’s graduation.

With each hardship, Rashaan wanted to give up. Then, he thought about his mom, and the thought came back to him.

So he kept going. And assessment by assessment, paper by paper, course by course, he proved just how capable he was of learning — and mastering — the knowledge and skills employers were looking for.

Today, Rashaan has two college degrees and a résumé boasting just about every IT certification he could possibly need. His hard work has paid off — he now works as a Cyber Information Assurance Analyst IV at one of the world’s largest aerospace and defense technology contractors. With his highly coveted skillset, Rashaan now finds himself in the unique situation where employers have openly fought over him.

“I would definitely say that I’m a person that doesn’t give up,” Rashaan says. “My mom always taught me that if one thing goes bad, if one door closes, another one will open. If something is not working out, move on to the next thing, but don’t ever give up.”

Donations to our scholarship program help students like Rashaan succeed.