The generosity of Ellen.

Today, Ellen DeGeneres awarded a full WGU scholarship to one of her audience members. It was inspiring to see the prospective student’s excitement and Ellen’s genuine encouragement and support.

This isn’t the first time I’ve had a chance to see the generous and thoughtful side of Ellen. In 2004, when I was working at the Pentagon, my team and I created a program called America Supports You. The program was designed to help connect Americans to nonprofits that were providing a variety of support programs to military members and their families. 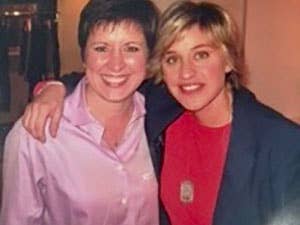 One day, I got a phone call that Ellen wanted to have a show to honor the military and support family members. She wanted to fill the audience with military spouses. We immediately got to work on a plan and we invited spouses from the military bases in California to attend the show.

First issue: transportation. As much as the military spouses wanted to attend, many of them didn’t have a way to get to the studio.

“Not a problem,” Ellen’s staff replied when I explained the situation. “Ellen will rent busses for them.”

Second issue: childcare. Many of the spouses were stay-at-home moms, and leaving their children for the entire day was just not an option.

“Not a problem,” Ellen’s staff replied — again. “Ellen will pay for daycare for the children at the military base facility.”

With these barriers removed, thanks to Ellen’s generosity, the spouses boarded the busses, early in the day, and headed to the studio. When Ellen realized the strenuous travel schedule, she arranged for everyone to have lunch once they got to the production lot.

The actual show was emotional, energized, touching, patriotic, and inspiring. Ellen led the charge and demonstrated her deep appreciation for all who serve our country and for their families. As the show concluded, Ellen gave each spouse a voucher for a ten-day cruise of their choosing! The spouse plus three of their guests would have the trip of a lifetime, thanks to Ellen.

Thirteen years later, and I am still impressed by Ellen’s generosity and belief in the power of supporting one another. Thank you, Ellen — again!