For Daniel Hankins of Austin, who works full-time at the Texas Health and Human Services Commission (HHSC), a WGU Texas corporate partner, the path to an undergraduate degree was anything but traditional. That’s why we asked him to share his story.

We’re launching a short blog series, The WGU Texas Night Owl Life, that follows Daniel from motivation to graduation. For prospective students or those just beginning their studies at WGU Texas, we hope it serves to enlighten and inspire your own educational journey. 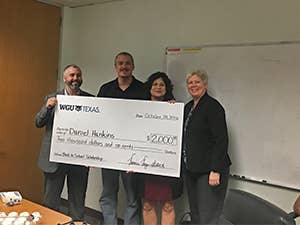 We’d love to hear your own stories about your WGU Texas Night Owl Life. Share it with us on social media, #NightOwlLife, or send us a note* with your personal stories of overcoming obstacles and achieving success.

First, we’ll let Daniel talk about his motivation for seeking his degree and applying to WGU Texas. Here’s Daniel, in his own words:

Ever since high school, I wanted to complete an MBA. Dropping out of college to support my family sidelined those aspirations. Between 2001 and 2015, I would occasionally contact various colleges about finishing my bachelor’s degree, but whenever I would look at the costs, I couldn’t even afford the monthly payments on a student loan. From 2015 to 2016, I was so busy it did not even cross my mind to check again, even though I saw the buses driving around Austin with the WGU Texas advertisements, and I’d heard the radio spots.

In September 2016, I was turned down for my director’s vacant position in favor of another applicant, a colleague with advanced degrees and experience in cyber forensics. At one meeting when we were discussing our life goals and progress toward them, I mentioned my lack of a degree. After the shock had passed that I was a manager who had never completed college and was leading a team of graduates — many with graduate degrees — a colleague strongly encouraged me to consider WGU Texas.

That night, as I checked out the programs and looked at the cost, I realized that I could afford it. IT Management was what I was doing full-time and had a lot of experience. I thought, maybe I could learn something that would help my work and advance my career.

What was holding me back? Time? Cost? I took stock of my free time, and quickly determined that I could easily put in 20 or more hours a week, as I did that playing video games, reading, or watching movies after the kids went to bed. My wife had always encouraged me to finish school (she was strongly against me originally dropping out). On the WGU home screen, there was a code to waive the application fee to WGU Texas. No more excuses. I applied.

Maybe it’s a promotion at work, encouragement from a family member or colleague or an opportunity to take your career into a new field or direction. What’s your motivation to attend WGU Texas and be a part of the Night Owl life?

Next on The Night Owl Life: Daniel shares his experiences during the application and enrollment process.

*email your success and motivational stories about life as a WGU Texas student to kathy.koza@wgu.edu.