Destined to Help Someone

Nitasha Lewis made a pledge to turn her life around and use her experiences to help others who were struggling. 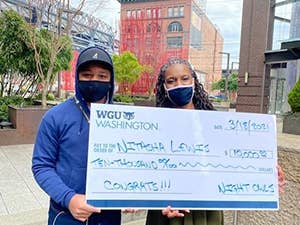 Nitasha Lewis and her son, Carlos

Nitasha Lewis is quick to espouse the power of education to transform lives. She’s devoted her career to advocating for students who are pursuing a higher education degree. As Upward Bound Manager at Peninsula College, Nitasha works with underserved high school students who are struggling to make the transition to college.

“Our students from low-income and first generation backgrounds do not know how to navigate the higher ed system,” says Nitasha.

“Being able to be that person that removes those barriers and paves the way for them to achieve their dream is phenomenal for me.”

These students are working to overcome extreme complications in their home life. These are issues that Nitasha understands well, as her path to education was fraught with adversity.

Nitasha had grown up in a strict, religious home and her sheltered upbringing had led her to misplace her trust in a man eight years her senior. At sixteen, she found out she was pregnant with his child and her parents suggested she marry him.

Nitasha was unprepared to handle the difficulties her new husband brought to the table. She found out that he suffered from a severe drug addiction. The stress of dealing with his addiction and being new to motherhood eventually pressured Nitasha to drop out of high school. After the birth of their second child, Nitasha became involved with drugs as well. The negative impact that brought to their home life resulted in her children being removed by CPS.

One day while walking the streets with her husband to pay for her drug addiction, Nitasha was approached by her father who had been searching for her since they lost contact. She immediately joined him in his car, was taken back in by her parents, and then reunited with her children.

“I left my husband there on the street and got in the car with my dad and the rest was history,” says Nitasha. “From that moment I knew that I was destined to help someone else that was in my shoes.”

At that point, Nitasha made a pledge to turn her life around and use her experiences to help others who were struggling. She earned her GED and then started looking for work.

As a single mother with no job experience, Nitasha took what she could. She started out as a night cleaner at a Farmers Insurance office and eventually became the office manager of that location. When she tried to advance further at Farmers, she was told that she would need a higher education degree. Nitasha tried to pursue other opportunities, she moved into a position at Target and after some time there applied for a management role. Once again, her lack of degree prevented her from securing the positions she needed to support her children.

“They told me even though I had all this experience, because I didn’t have the degree they couldn’t hire me. So I let that motivate me and I said to myself: no one’s ever going to tell me that I can’t pursue a position that I’m qualified for because I don’t have a degree.”

Now Nitasha is earning her master’s in management and leadership at WGU Washington. Nitasha says this will be a stepping stone in her higher ed career.

“My dream is to become a dean or even a college president.”

Recognizing the amazing work Nitasha has put in to transform her life, WGU Washington recently surprised Nitasha with a $10,000 scholarship during a recent interview with KING-TV’s New Day Northwest.

Nitasha is one of 10 recipients of WGU Washington’s 10-Year Anniversary scholarships.