A Master Class in Breaking Traditions

Married couple walks and receives their masters’ degrees together, blazing a trail of determination for their three boys to follow.

A lesson in determination has paid off handsomely for two Whatcom County women. After earning a combined four degrees from WGU Washington  (WGU) in just four years, married couple Virginia Gonzalez and Kulia Vasconcellos say they have almost quadrupled their joint income. They accomplished this inspiring feat as a family, often studying together with their three boys at the kitchen table. While the parents worked on their master’s degrees, the boys learned an even greater life lesson—that they can do it, too.

“While she completed a proctored exam, I would handle dinner and our children. Then we would switch,” Gonzalez recalls. “We talked about working for our degrees constantly because we wanted them to see that it’s never too late.” 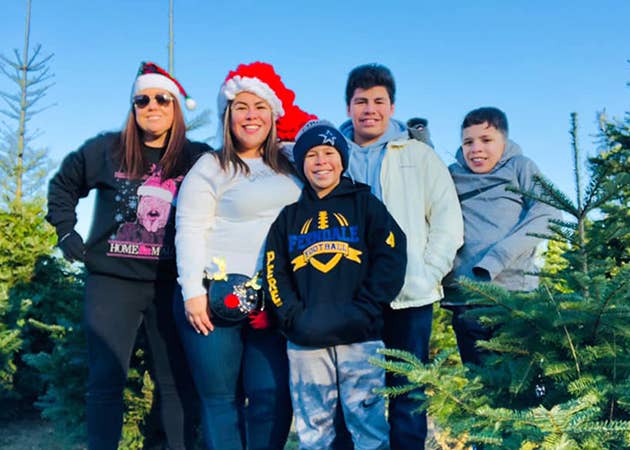 Both women say they “failed” at college the first time and felt too afraid to go back. But once they dove in headfirst, they felt no hesitation in rolling right into their master’s programs during Covid. Vasconcellos was the first to enroll in Business Management  at WGU.

“I first heard about it through a colleague whose son was attending WGU. She mentioned how WGU works and its affordability, so I eventually investigated it. I wanted a degree but never thought I would be able to afford it,” Vasconcellos says. “I found myself married, in my early 30s, and with three boys. I recognized at work that I had all the experience and tools, but I needed a degree for further promotions.”

Looking back, Vasconcellos says she doesn’t know how they juggled it all. She started by making a list of goals with deadlines. She tacked it up next to her side of the bed and looked at it every day.

“I told my friends and family what I was working on and was given verbal encouragement from all, especially my wife,” she says. “My advice would be to recognize what sacrifices would have to be made, don't beat yourself up for making them, and remember your ‘why.’ We wanted better opportunities and that meant taking time to study and pushing the mom guilt away. The sacrifices and efforts brought us to our long-term goal, and now we are seeing the benefits.”

For her wife, it was a much “quieter” approach.

“I did my program quietly, as opposed to Kulia, who told all her friends and family. She was so excited, but I still felt shame over my first failed attempt at a university,” Gonzalez says.

She was a straight-A student growing up and was accepted into the University of Washington. The classes were very challenging for her, especially since she also had to work.

“My grades suffered and that was hard for me to mentally handle. I decided to take a year off from school to figure my life out and before I knew it, 20 years had gone by. I always wanted to go back, but I felt a lot of shame from having dropped out,” Gonzalez explains. “Then Kulia came into my life. She was my first rewrite from my crappy first draft of life. So, when she enrolled and began working towards her degree, I saw a glimmer of hope for myself.” 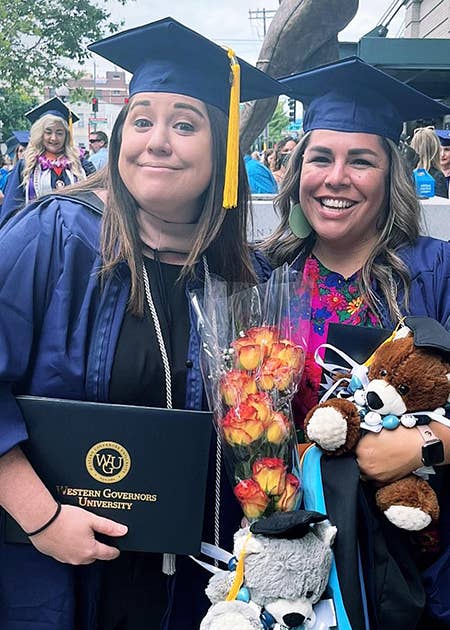 Gonzalez’s father played a huge role in her continuing on to earn her Master in Education Instructional Design. He was born in Mexico and came to the United States when he was 20 years old. He didn't speak English and did not attend school past elementary grades. He knew that he needed to learn English to get ahead, so he enrolled in classes at a nearby community college and watched “Sesame Street,” practicing whenever he could.

“My parents successfully opened a Mexican restaurant in a small town in northern Washington near the Canadian border. Dad has mentioned at times how he wishes he had stayed in school. He came to the U.S. with dreams of a better life, and he gave that to my sisters and me,” Gonzalez says. “Dad was present at our master’s degree graduation in Seattle this summer with happy tears in his eyes and pride in his heart. He has four daughters. Three of us now hold a bachelor’s degree, at minimum. My youngest sister graduates from high school this year, so she'll join us soon.” 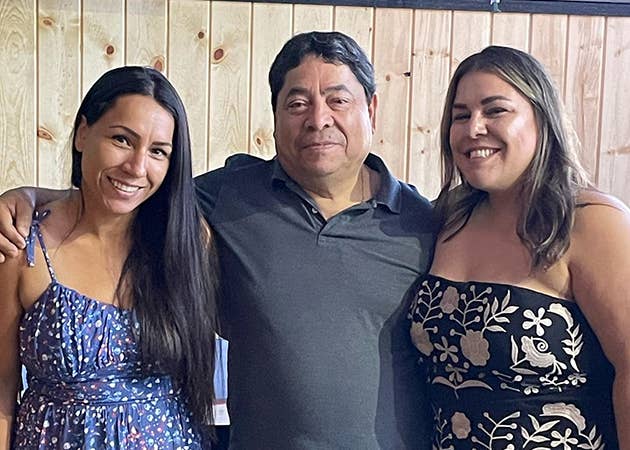 Cultural heritage played a prevalent role in their home.

“I knew growing up that I was Mexican-American, whereas many of my friends and neighbors were American. It wasn't until I was older that I realized how different our household was, how important representation matters, and how underrepresented Latinas are in post-secondary education,” Gonzalez said. “Factors that contribute to this could be cost per degree, accessibility (online versus in person), familial barriers, overcoming imposter syndrome and being given permission to dream.

“I am constantly aware of who I am in a crowd. When I walk into a large room, I'm scanning everyone in it to see who looks like me, so I don't feel alone. The fact that only 6% of Latinas hold an advanced degree fueled me. The possibility of joining their ranks empowered me.” 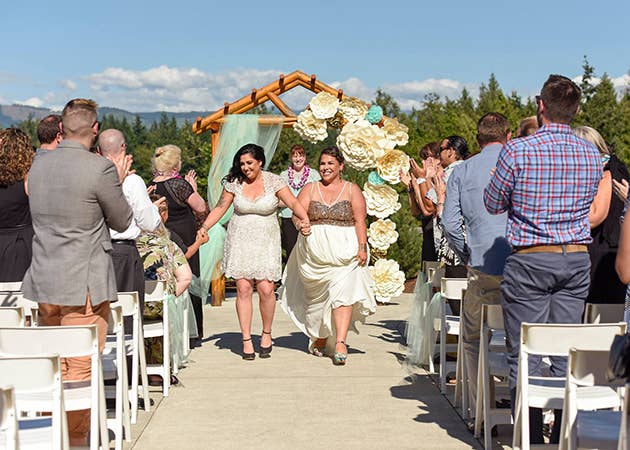 Kulia and Virginia on their wedding day.

They say their joint empowerment has resulted in a household income that has almost quadrupled in their time together, especially since completing their degrees. Gonzalez earned her master’s in Instructional Design and is now a human resources manager for the Boys and Girls Club of Whatcom County.

Vasconcellos was recently promoted at work and is a vice president of commercial lending for a local bank (SaviBank). She says one of the greatest lessons they learned by earning their degrees is they are both more capable of doing harder things than they realized.

“No matter what stage you're at in life, it is never too late to improve your own situation. You are in the driver’s seat and there is opportunity out there,” said Vasconcellos. “Go searching for it and when you locate it, find the courage to make the jump, too.”

As a proud Hawaiian and a proud Latina, it is the couple’s dream for their boys to see more women rising—especially women of color.

“I want them to know their moms are warriors,” Gonzalez says, “who showed them to keep fighting for what you want, especially if it will pay off in the long term. They can do it, too!”

By Courtney Dunham, Communications Manager for WGU Northwest Region. For media or other inquiries, contact Courtney at 206.388.8926 or Courtney.dunham@wgu.edu