MBA is part of a new life for WGU Indiana graduate.

No matter your story or circumstance, earning a college degree can start your life on a new path — just ask WGU Indiana graduate Heyde Mitchell.

For several years, Mitchell had endured verbal and physical abuse and an attempted shooting by her then-husband, all while she was raising the couple’s two young daughters. 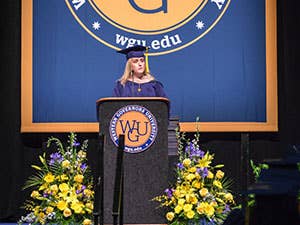 In 2015, Mitchell made an important decision. She wanted independence and a new life. It was then that she decided to return to school to earn her MBA, which she hoped would lead to a promotion and the advancement of her career. Mitchell chose WGU Indiana because the online course offerings were an ideal fit for her schedule. She could complete her coursework early in the morning to avoid losing quality time with her daughters in the evening. The university’s competency-based learning approach allowed her to apply the knowledge she had already learned in her field and help her reach her goal of completing her program within two years.

Then Mitchell’s husband went further than he had ever gone, and tried to end her life. Mitchell managed to escape with her two children. She never looked back. She divorced her husband and completed her degree in only fourteen months.

On a Monday in February, Mitchell was notified that her divorce had been finalized. On Tuesday, she learned she had successfully completed her MBA program with WGU Indiana. On Wednesday, she was rewarded with a well-deserved work promotion. Since then, Mitchell has developed a domestic violence awareness program at her workplace. “WGU allowed me to have the flexibility and accountability I needed to become a success story,” she says. With more than 5,400 WGU Indiana graduates and more than 5,200 current students, there are thousands of success stories and many more in the making. We believe in the power of education to transform lives.

To explore WGU Indiana’s more than 60 undergraduate and graduate degree programs, visit www.wgu.edu/indiana.html. Through March 31, be sure to check out the $2,000 New Year, New You scholarship.