WGU Missouri alum Cindy Riordan is the Chief Information Officer (CIO) for the City of St. Louis and is at the helm of the city’s Information Technology Services Agency (ITSA). Before enrolling in WGU Missouri’s Master of Business Administration — Information Technology Management (MBA-IT) program in June of 2016, she spent more than two decades of her career with the city making government services more efficient through various process improvement efforts. Along the way, she discovered her passion for the implementation of technology solutions and set her sights on advancing her career. 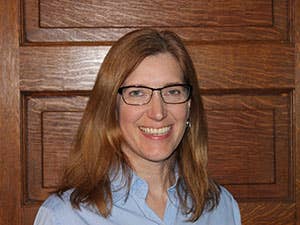 “Once I realized where I wanted to go with my career, I knew I would need a post-secondary degree to land interviews for higher management positions,” said Cindy. “I also knew that for it to be worthwhile, the degree would have to cost less than the potential income increase.”

Tuition wasn’t the only factor taken into consideration by Cindy. She had two kids heading into their college years and wasn’t interested in taking out student loans for herself. Plus, she didn’t want to sacrifice all her free time to go to school, nor have it take years to earn a degree by only going part-time. She found WGU Missouri to be the perfect fit.

“WGU was a win in every column — affordable, self-paced and self-scheduled,” Cindy said. “I was motivated by the prospect of earning my degree in less than two years and not missing out on activities with family and friends.”

Cindy’s husband is a school teacher and with two teenage sons, week nights were pretty much homework nights in the Riordan household. Cindy found it easy to set aside a couple hours every night to do her course work.

“The course work was rigorous, but everyone — from my student and course mentors to my partners on my capstone project — was committed to seeing me succeed and meet my goals,” she said.

Cindy enjoyed attending webinars and scheduling meetings with the professors online and according to her schedule, rather than having to drive to a lecture hall. And, with 12 years of management experience under her belt and familiarity with different leadership styles and HR regulations, she very much appreciated the competency-based format as it allowed her to speed through some courses and then take extra time on other content.

While working through each course for her degree, Cindy said she was constantly tying the theories and strategies back to how they could help her department run better.

“I learned a lot about business management that I am now using in my work,” she said. “This degree has taught me new ways to approach problems, and it also reinforced some of my current strategies. It gave me confidence to apply for my current position.”

In under one year, Cindy completed her MBA-IT from WGU Missouri and was named the CIO for the City of St. Louis and head of the ITSA, which is responsible for maintaining the City’s wide-area network, including providing network support for 3,500 employees in nearly 20 buildings. ITSA also provides network support for a growing number of mobile devices for the employees working in the field and is in charge of software and web development, GIS services and database administration for all city government offices.

“WGU Missouri helped me land my dream job,” said Cindy. “Without this degree, I don’t think I would have gotten an interview for the city’s CIO position. The degree I earned from WGU gives me the foundation to draw from as I lead the city’s technology division through big changes. It’s also given me a new appreciation for the value of education, at any age, and what it can do for both the individual and the organization they work for.”