WGU Missouri student Angela Brakebill proves that goals can accomplished through steadfast commitment. Even with major obstacles adversely affecting her and her family, she will soon fulfill her 24-year goal of earning a college degree.

Angela graduated from high school in 1994 and put off college for 20 years, choosing instead to move to Florida, where she had her first child. She ended up being a single mom for many years, until 2004 when she married her husband — a widower who had two children from his previous marriage. 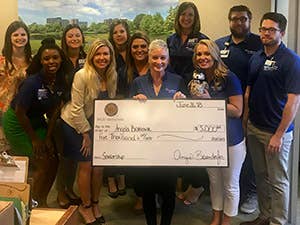 They had two more children, and over the first 10 years of their marriage, she chose to stay home and raise their five children while her husband worked overnights as a deputy sheriff and 911 dispatcher.

Angela never forgot about her dream of going to college, though, and enrolled in school in 2014. “I want my kids to know that it’s never too late or too difficult to chase and capture your dream. For me, that’s becoming a college graduate.”

Angela’s educational journey has not been an easy one. She has had multiple setbacks but has never given up. During the past four years, she was involved in a detrimental car accident that totaled her car, and she had to undergo two years of physical therapy and a surgery. As if this wasn’t enough hardship, her husband became disabled, her grandson was diagnosed with cancer and underwent chemotherapy for a year, and another grandson came to live with them.

On top of everything, Angela and her family relocated to Missouri in January 2017. “None of this stopped me from pursuing my degree,” said Angela.

She landed a position with Cox Health Systems in Springfield as the human resources coordinator for the Human Resources Recruitment and Retention Department. She also transferred from her school in Florida and is now pursuing a Bachelor of Science in Business — Human Resource Management at WGU Missouri. She was even surprised with a $5,000 WGU Missouri 5th Anniversary Scholarship on June 11, so things are beginning to look up for Angela.

“I finally found a school that has everything I need — flexibility, student support, low tuition, competitive curriculum and accreditation,” said Angela. “My previous school was great, but there definitely wasn’t the support and flexibility there that WGU offers. It was difficult to make school work around a full-time, 8 to 5 job.”

With tremendous support from her friends, family and employer, she has been able to balance her work, academics and personal life. WGU has been there to help along the way, and she loves the flexibility and affordability the university offers. “I am able to decide when I want to start and finish a class, how quickly I work through the course and how I want to complete the course,” she said. “The tuition costs are so much lower than other schools I have looked at, and the education I’m receiving is better than my previous experience.”

Angela also enjoys WGU Missouri’s competency-based model and working through course material at her own pace. “I have an advantage by being an older ‘non-traditional’ student because I have work experience that takes the place of some material that I would normally learn in school,” she said. “That helps me move quicker through some coursework.”

The education Angela has received in her first term at WGU is already being utilized in her current role, and she is being promoted to associate business partner with Cox Health Systems at the end of the summer. Upon finishing her degree, she will be promoted to business partner. This promotion comes with a substantial raise that will improve her family’s way of life.

“Earning my degree will be my greatest personal accomplishment and will allow me to move up in my company,” said Angela. “I can’t wait to feel the pride of completing a journey I started on August 11, 2014. It will show my children that they can do anything they want to if they have the will.”