Associate degrees can be a steppingstone to four-year degrees. 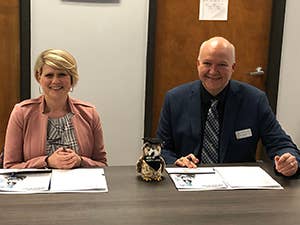 To date, WGU North Carolina has signed agreements with ten North Carolina community colleges, and is actively in discussion with several more. In addition to facilitating easy transfer of their graduates to WGU, the agreements typically also include a 5% tuition discount for grads and employees, and access to WGU Community College Partnership Scholarships valued at $2,000.

Why is this important? First, WGU North Carolina’s commitment to increasing educational opportunities in more rural areas of the state dovetails perfectly with our community college partnerships. Second, partnerships like these will help North Carolina meet its critical workforce needs in the coming years. Third, after nearly a decade of decline, enrollment at community colleges in our state is now on the rise.

“When we launched WGU North Carolina in October 2017, there was a perception among some community college leaders that we would be stealing students from them,” said Chancellor Truitt. “In fact, our message to community college students has been and will continue to be ‘Get your associate degree first, then come to us when you’re ready to pursue a four-year degree.’ I’m happy to say that perception has changed as more community colleges get to know us and partner with us.”

The general consensus is that community college enrollment decreases when the economy is healthy and fewer adults feel the need to pursue post-secondary degrees. However, the recent bump in enrollment counters that trend. Enrollment in traditional academic programs at North Carolina community colleges rose by 3.8% while short-term workforce education programs rose 9.4%.

President Hans attributed the increase in enrollment to several factors, including 1) local innovations and leadership at the colleges, 2) a renewed emphasis on workforce training, and 3) a privately funded marketing campaign titled “Your Hire Education” that promoted the state’s community colleges.

“In my travels to community colleges throughout the state, I’ve seen a real commitment to innovation in ways to better serve students,” said Tenita Philyaw-Rogers, Strategic Partnerships Manager for WGU North Carolina. “Community colleges are a tremendous resource for local residents and can lead to an in-demand associate degree or serve as a steppingstone to a bachelor’s degree with even greater career prospects.”

For more information about how community colleges can partner with WGU North Carolina, contact tenita.philyawrogers@wgu.edu.