This is the fourth in a series profiling members of WGU North Carolina’s inaugural Board of Advisors. 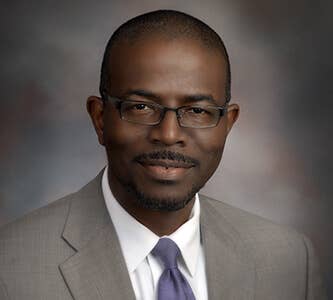 Dr. Robert Taylor, Ed.D., has served as superintendent of Bladen County Schools since 2011. Previously a teacher and assistant superintendent in Clinton, N.C., Dr. Taylor has worked in the education sector for 25 years. He earned his doctorate in educational leadership and administration and a master’s degree in school administration from Fayetteville State University after completing a bachelor’s degree in history and political science at the University of Southern Mississippi. He received the Friday Award from the Friday Institute for Innovation in Education at N.C. State in 2017 and currently chairs the N.C. Virtual Public School Advisory Council.

I hope to bring perspectives not only from the K-12 education world, but also from my work in rural North Carolina where I’ve witnessed the positive impact WGU has on people trying to advance their education. Many of these individuals have work experience but haven’t had an opportunity to matriculate at a university level. I am always interested in learning what I can do to help these students gain access to higher education, especially when they can do it at a reasonable cost. This is where WGU is breaking the mold.

Probably what stands out most is the success rate of its students. A lot of people may laud their universities for the number of students who apply, but you don’t hear as much about the matriculation rates. When I learned that the majority of WGU students graduate and then go on to successful careers, it had a tremendous impact on me.

I’ve also been impressed with the framework that WGU has built to support its students. The university is extremely good at designing and delivering a first-rate support system for online learners, and that clearly goes hand-in-hand with the high graduation rate. This aspect of the WGU model especially piqued my interest because of my work with the NCVPS Advisory Council. We’re always looking to discover what helps make online learning a success, and clearly WGU is the expert in the state. Its ability to deliver affordable online education efficiently and effectively is a key point of differentiation. I want to learn and share with my peers the best practices that WGU has developed in online learning.

My biggest concern revolves around student access to a quality university degree. North Carolina has a large number of residents who need and want access to higher education, but their situation often makes that impossible, whether it’s their geographic location, work schedule, available resources, or something else. WGU is providing an avenue to do that in a way that does not compete with states’ traditional colleges and universities.

Online learning is going to dramatically change the landscape of what universities look like. I think the biggest adaptation for traditional brick-and-mortar universities will be that they will still have their physical footprints, but there will likely be fewer students on campus. The percentage of students who take some or all of their courses online will continue to increase exponentially.

First, a continuing decline in population as young people move to more urban regions. That’s largely fueled by the second issue: a lack of economic growth and, therefore, availability of jobs. Together, these issues drive the third issue, which is the absence of the right kind of trained and educated workforce. I work with economic developers in my community and some businesses that want to invest in rural North Carolina. The hurdles blocking that growth are skills gaps plus the challenge for local residents to get the training and education they need for the jobs of today and tomorrow.

First and foremost, our business community so they can be familiar with what we’re doing to fill the void and help ensure we have the educated workforce employers need. I think this will be helped as WGU builds more collaborative relationships with the state’s community colleges that already have strong ties to local businesses.

It’s important for our state’s educators to take the opportunity to sit down with WGU and ask how they can partner with them. All educational institutions need to study WGU because what they’re doing is the wave of the future. They are providing easy and affordable access to quality education for all. We should learn how they’ve been so successful and then design programs based on that model.

It’s also critical that the state’s elected officials, especially in the General Assembly, know about WGU so they can help WGU and similar schools help North Carolinians improve their lives. They need to understand the myriad benefits that WGU brings and that its success is not a loss for the state’s traditional universities.