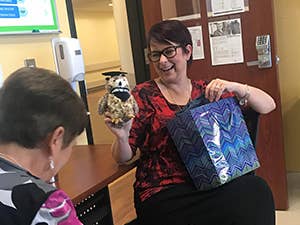 Stephanie worked for eight years as an environmental chemist after earning a B.S. in Biology. But long hours working in a lab had her reassessing her career choice. She made the switch to nursing and has worked at Texas Health Presbyterian in Plano for 17 years. In 2001, she completed an Associate’s degree in nursing from Collin Community College and accepted a position in postpartum. Stephanie has seen a lot of changes at the hospital over the years, including the transition from traditional to couplet care (mother and baby) and an employer that encourages nurses without a BSN to return to school.

As her children began to grow up, she spent less time volunteering at their schools and found a little more spare time on her hands. After nursing her mother back to health following surgery and thinking about career opportunities a BSN may afford, Stephanie started researching online MSN programs.

“The perfect school would be affordable, with little out of pocket expenses—my employer covers some tuition, would not require group projects, or cause me to miss out on family time or activities with my children.” WGU was the only school that checked all the boxes on her list.

The search led to a phone call to a WGU enrollment counselor, completing an application and requesting transcripts. “Before I realized it, I thought, this is really happening now,” she said. “Timing is everything!”

Now a WGU Texas alumni, Stephanie shares what she enjoyed about her experience as a student. “One of my favorite things about WGU is the affordability. I earned two degrees for $7,000. I have co-workers that pay $2,200 per class.” Taking advantage of employer tuition reimbursement, she was able to reduce her out of pocket expense and financial burden. The competency-based assessments allowed her to finish courses quickly by proving she had the required knowledge. “I didn’t have to spend weeks in a class where I was already competent.”

Stephanie enjoyed the program’s flexibility, especially when a close family member passed away. “I had just started with WGU. Because the program is self-paced, I was able to make my family the priority during a stressful time,” she said. “Had I been attending any other school, this would not have been possible.”

After enrolling, she realized she could accelerate her degree program. Her personal goals were to accomplish as much as she could before year-end holidays and major family commitments, take a short break and work hard to complete her courses. “This flexibility is the reason I was able to complete my BSN and MSN so quickly.”

During her time as a student, Stephanie had two program mentors. While her first mentor encouraged her, keeping her on track through the BSN, she found a real connection with her second mentor. “She was exactly what I needed. She made a point of listening to me to assist in recognizing my strengths and weaknesses. She was responsive, knowledgeable, organized and my personal cheerleader through those last few classes.” She says their support was a big part of her success, as well as the guidance and expertise the course mentor provided during the final courses. “I told her my goals and she told me what I needed to do to get there.”

Stephanie’s words of advice: “They say you should begin a task with the end in mind. When I returned to school, I focused on the goal of earning my degrees.” She says along the way she also earned the freedom to explore career options and career growth and improved overall job satisfaction.

And future plans? “I miss being a student and being in a constant learning mode. If WGU Texas opens a doctoral program, I will be the first to enroll because I cannot imagine doing school any way other than the WGU way.”