Enough I can’t, it was time for I can.

Toni Marek As I stood on the stage this fall, preparing to accept my Master's of Science in Management and Leadership degree from WGU Texas, like many others, I wasn’t sure this day would happen.

“You can’t do it. You’ll never be more.” Nearly every day of my adult life, those words spoken to me echoed in my head in a continuous loop.

I was brown, poor, and no one in my family had ever attended college. I accepted the opinions of others as the reality for myself and ignored the idea of college. I felt like I didn’t have what it took, I couldn’t do it, and I would never be more.

After graduation, I served eight years on weekends in the Army Reserve and the rest of my time serving customers in nightclubs and restaurants. I accepted that my more was never going to include college or a fulfilling, successful career. 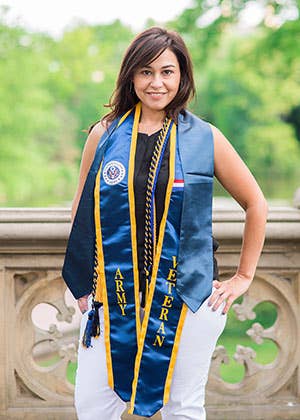 Over the years, life happened and my more became being a mom to the most gorgeous, smart, and kind-hearted tiny human boys. My more became focused on one solitary goal: their happiness and perfect futures. But all too soon, the focus changed and I was a divorced, single mom.

Then one day – I broke. I thought I would never be more.

That day, in a random parking lot in the middle of the day, I sat in my car and cried. I cried for myself and for my boys.

And that day – I realized I was the biggest hypocrite I knew. I had always used what others said as an excuse for why I couldn’t do it and be more. But, what if the roles were reversed? Would I let my kids blame everyone but themselves for their fear or failures?

The answer was an unequivocal NO.

That day I realized my real truth: I was scared of trying to see if I could do it and be more – and I was done.

The next six years were truly the hardest years of my life and I found out a few things along the way.

I wasn’t too poor. Money isn’t a reason to forego college—ever. There are scholarships and grants everywhere – if you put in the time and work for them.

I wasn’t too old. Over one-third of college students are over 25 and the average age of graduate students is 33, and of those, more than 20 percent are over 40 years old.

I wasn’t too stupid. In 2016, I graduated with my baccalaureate degree with over 500 other graduates – as the valedictorian and only student to earn a 4.0 GPA.

And, I wasn’t finished: I wanted my master’s degree. Scholarships aren’t easy to find for graduate work, but I searched and eventually found the “Texas Trailblazer Scholarship.” I researched WGU Texas, spoke with an enrollment counselor, but thought it was too good to be true. A graduate degree, from a fully accredited, not for profit, online school, for much less than what other colleges were charging? Yes, it’s true, and yes, I finally can.

The amazing WGU staff and Course Instructors guided me through a seamless process and I earned my MSML in under a year, even earning an excellence award along the way. Through it all, one voice stood out from the others and pushed me, championed me, and encouraged me to do everything I wanted and more. My Program Mentor literally changed my life course. She got to know the real me and encouraged me to reach further in my career.

Thanks to my mentor’s encouragement and my master’s degree, I now work as the patient experience manager at a major health care system. It is by far the most fulfilling and rewarding job I have ever had.

That day I cried in my car was the last time I cried over the things I had the power to change. This degree means so much more to me than most people know. It was a life changing journey that led to a humbling realization: there was always love and support that overshadowed my own fear of failing.

Now, I have realized ambition is rooted in conquering the fear of inadequacy and truly learning to live through my failures and with my success, never forgetting the enormity and inevitability of their undeniable coexistence.

Everything I have accomplished, I did for me, my family, my success, and their success. I have truly set fire to those fears and let desire and determination rise from the ashes.

Toni Marek, a single mother who served eight years in the Army Reserves, graduated Phi Beta Kappa from Northeastern University as the only student in her graduating class to earn a 4.0. Most recently, Marek earned her MS in Management and Leadership from WGU Texas and was a featured speaker at the university’s annual commencement.