How one WGU Texas grad turned her childhood dream into reality. 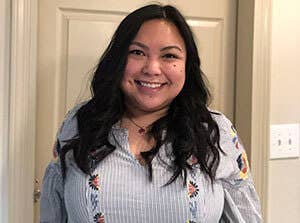 Let’s talk about plans—big and small, everyone has them. Whether it’s a plan for the weekend, a quarterly plan, or a five-year plan, it can be tough to come up with one, and even tougher to keep.

So, what happens when you don’t settle?

Kathleen Satumbaga set goals in elementary school, and never stopped until she reached them.

When her family emigrated from the Philippines, Kathleen’s father made it very clear that education was a priority. Although she didn’t understand it initially, Kathleen soon realized why it was so important. “Education can never be taken from me,” she said, “Jobs and people come and go, but no one can take away what I have achieved. [My father] helped me lay the foundation for my career.”

Kathleen’s father holds a master’s degree in engineering, and it was his education that positioned her family’s move to America. “It opened doors for me,” she said, “I knew from a young age that I would not settle for anything less than a graduate degree.”

When she started the BSN to MSN Nursing Leadership program at WGU Texas, Kathleen planned to finish her master’s degree in one year, but life intervened. “I bought a house that caused more problems than anticipated and my family and I had to live in a hotel for two weeks,” she said. Kathleen was working full-time and feeling emotionally broken down, but she found the strength to finish her assignments at 2 a.m. from her hotel room.

Shortly after, the death of her grandmother prompted Kathleen to make an unexpected trip to the Philippines to say her goodbyes, “I remember crying during the entire 14-hour plane ride,” she said, “but I still typed up my paper in between all the tears.”

As major obstacles presented themselves one after another, Kathleen’s determination was tested but never broken. “I didn’t know if I could do it, but my mentors provided the support I needed, and I never felt I did not have the tools necessary to finish,” she said. “WGU exceeded my expectations.”

Now a WGU Texas graduate with a master’s degree, Kathleen is glad to have finished what she started. What was once a one-year plan became a two-year plan and yet, without settling, Kathleen never stopped until she reached it.

Kathleen was selected as a graduate speaker for the 2019 regional commencement ceremony at the Anaheim Convention Center on June 8. To hear more of her inspiring story, the ceremony will be live streamed. The master’s ceremony begins at 9:30 a.m. Pacific daylight time.