NASHVILLE – A large majority of Tennesseans think Gov. Bill Lee should devote as much or more time and resources on higher education and workforce development as did his predecessor, Gov. Bill Haslam, according to a statewide survey commissioned by WGU Tennessee.

The survey also found that a majority of Tennesseans believe that Gov. Lee’s administration should make access and affordability of college and technical training a high priority. Additionally, a majority think state government should do more to ensure public school students are prepared for college-level work, while almost half say the state should increase its funding for college education.

The study, conducted by the Dallas-based market research firm Dynata, surveyed 600 randomly selected registered voters who are currently employed to gauge attitudes and opinions regarding higher education issues, including financial aid for traditional and online degree programs. It has a margin of error of plus or minus 4 percent at a 95 percent confidence level. 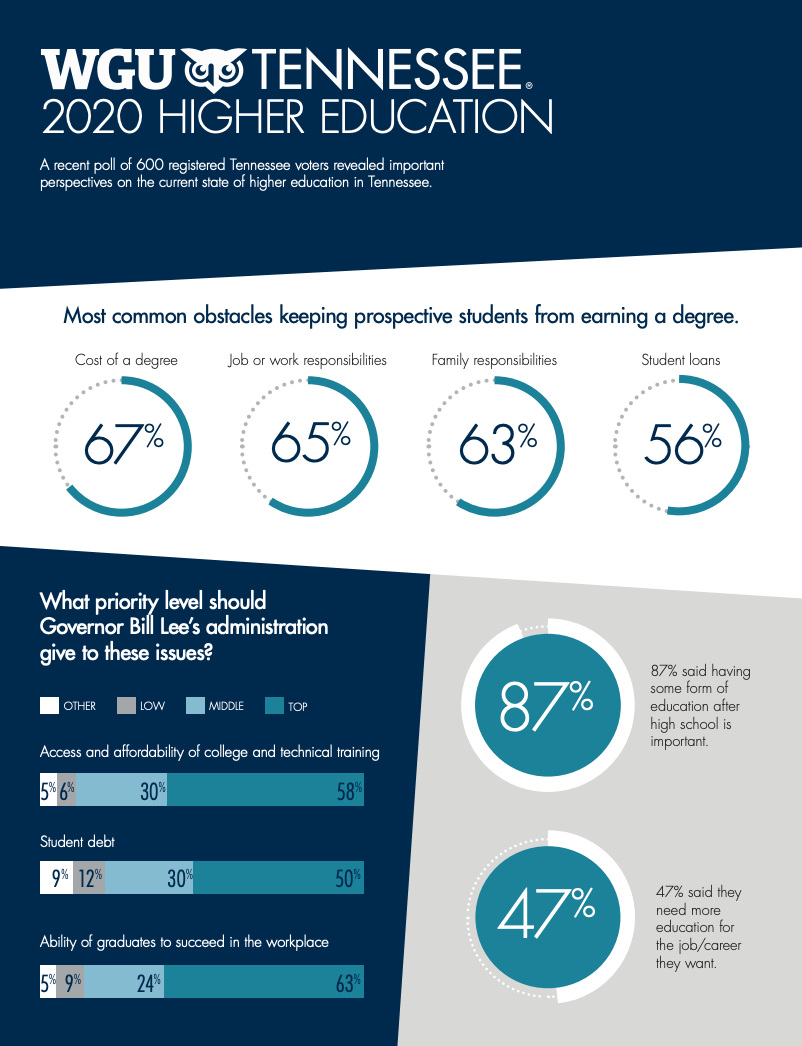 “The results show that Tennesseans continue to support expanding access to post-secondary education and training,” said Dr. Kimberly Estep, chancellor of WGU Tennessee. “The fact that 63 percent of Tennesseans believe that an online degree is better than or about the same as a traditional degree program demonstrates a real and welcome shift in perspective and leads to more people earning a post-secondary credential.”

Also worth noting is that an overwhelming majority – 81% – of Tennesseans agree with Gov. Lee’s focus on increasing higher education opportunities in rural areas.

“We absolutely share Gov. Lee’s priorities regarding rural access to education,” said Dr. Estep. “Our ‘Everywhere, TN’ campaign exists to that end, and we’re excited about what the future holds for education in rural counties under Gov. Lee’s leadership.”

Dr. Estep said WGU Tennessee plans to do annual tracking surveys to compare results against the benchmark 2019 study. “The information is not only useful for WGU Tennessee, but we think it is also of interest to others involved in higher education, to legislators and policy makers, and to the general public.”

of respondents think Gov. Bill Lee’s administration should spend about the same or more time and resources on higher education and workforce development as did the Haslam administration.

think more resources and time should be devoted, and 50% believe is should spend the same amount.

Respondents were asked to rate six areas of possible focus on higher education and workforce development in terms of whether each should be a top, middle or low priority for the Lee administration.

A strong majority (61%) think Tennessee state government should do more to ensure public school students are prepared for college-level work, while 26% say it is doing a good job at the current level.

think Tennessee colleges and universities provide adequate financial aid, 28% believe it is inadequate, and 32% don’t have an opinion.

think it is very important (53%) or somewhat important (34%) for someone to have a college degree or a career-related certificate beyond a high school diploma.

agree that obtaining a college degree or certification beyond high school is essential for getting a good job, and 79% agree that it leads to a higher income.

The study used a blended methodology: 350 randomly selected respondents were interviewed by telephone (36% landline, 64% cell phone), and 250 responses were completed through an online sample screened for demographics.

WGU Tennessee is an online, nonprofit, competency-based university established to expand Tennesseans’ access to higher education throughout the state. Formed through a partnership between the state of Tennessee and nationally recognized Western Governors University, WGU Tennessee is open to all qualified Tennessee residents. The university offers more than 50 undergraduate and graduate degree programs in the high-demand career fields of business, K–12 teacher education, information technology, and health professions, including nursing.