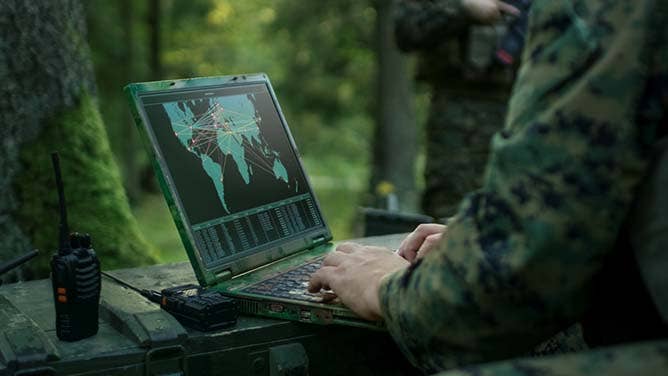 The military is flush with rewarding careers that require expertise with information technology and computer systems. As the military ramps up its use of technology to augment operations and defend against cyberattacks, these IT roles will become increasingly vital to the protection of the nation's data and people. While some of these are traditional IT jobs, such as network and database administrators, cybersecurity specialists, and computer programmers, other roles are unique to the military environment.

If you're interested in IT and serving our country, here are four intriguing military IT careers.

The internet is the newest global battlefield. Seemingly everything is on the internet, and powerful entities want to damage their enemies' vital infrastructure—including power grids and financial systems—through coordinated cyberattacks.

According to the U.S. Navy website, cyberwarfare engineers serve on the front lines by defending networks, searching for vulnerabilities in our enemies' computer infrastructure, and developing systems that can exploit these vulnerabilities. They facilitate tactical operations through software development and programming, and they protect financial, personal, and governmental data from falling into the wrong hands.

Defense News reports that the base salary for this role is around $37,000 a year, but it comes with various government benefits. It also notes that the U.S. Navy is hiring cyberwarfare engineers in an effort to "build a more informed and skilled software engineering cadre." If you have a bachelor's degree in computer science or computer engineering and want to use your skills to defend the country, a career as a cyberwarfare engineer could be right for you.

Successful operations rely on understanding as much as possible about the location of enemy defenses, the surrounding terrain, nearby resources, and other information. According to Careers in the Military, geospatial imaging officers collect and analyze geospatial data from multiple sources, such as satellite imagery, topographical information, and other geographic intelligence, and they use this data to plan, organize, and execute tactical on-the-ground operations.

Today's Military reports that intelligence specialists play a critical role in ensuring that military operations are planned using the most accurate and up-to-date information available about enemy forces and capabilities. IT specialists oversee the collection, production, analysis, and distribution of intelligence data to key military leaders and consumers.

Intelligence specialists have civilian-world counterparts in data scientists and research analysts. Candidates who are interested in this career should have strong analytical skills and an interest in computers, among other attributes. The average salary is about $60,000 a year, according to Today's Military, but intelligence officers with four-year degrees can earn much more—about $94,000, on average.

The military uses unmanned vehicles to conduct remote surveillance, gather intelligence, attack targets, and explore dangerous terrain like the deep sea, among other applications. It needs skilled personnel to operate and maintain these vehicles, and that's where unmanned vehicle operations specialists come in.

These specialists use their background in computer science, programming, and systems administration to maneuver unmanned vehicles. On average, they make about $54,000 a year, according to Today's Military. If you like programming and operating robotic devices, this career might be for you.

As these positions illustrate, there are many ways to combine an interest in technology with the call of duty. A bachelor's degree in computer science or a related field can help you launch a successful military IT career.