How to build a successful DevOps career. 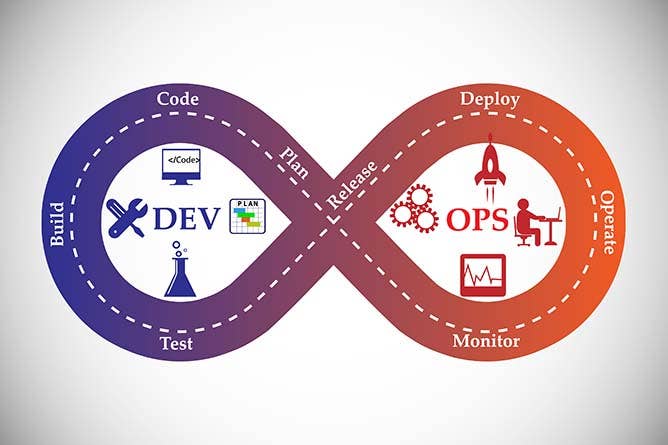 Within the vast industry of information technology, DevOps is a game-changing field. Combining development and operations, DevOps has changed the way IT teams approach technology management. Here's everything you need to know about DevOps to get your career started.

DevOps, as a career option, is still in its infancy; it's not yet recognized by the U.S. Bureau of Labor Statistics. (Glassdoor, though, reports an average salary of about $115,000.) To better understand DevOps, why it's important, and what's available under the DevOps career umbrella, it's worth taking a closer look at its origins. The movement got its start in 2009 when frustrated IT consultant Patrick Debois endeavored to unify two siloed IT areas—development and operations—says DevOps expert Damon Edwards in his video The (Short) History of DevOps.

"One day he'd find himself deep in the rhythm of agile development, and the next day he was firefighting and living the unpredictability of traditional operations," Edwards says in the video. In 2009, Debois founded the devopsdays tech conference. The grassroots conversation continued on Twitter, and the rest, as they say, is history.

Today, DevOps helps organizations increase code deployment, reduce testing time, and increase efficiencies through automated tools, according to Hackernoon. DevOps adoption is steadily increasing, according to the 2019 RightScale State of the Cloud Report, and Forrester named 2017 and 2018 the Year of DevOps and the Year of Enterprise DevOps, respectively.

Rather than focusing explicitly on either development or operations, the DevOps model has all IT professionals on a project work collaboratively. If this kind of IT environment is appealing to you, there are a few different ways to become a DevOps expert.

DevOps professionals need to know a little bit about everything in the software development lifecycle, from building to testing to deploying. Someone with experience as a systems administrator will be more qualified to succeed in a DevOps environment by knowing how to write code in a foundational programming language such as Python.

There are plenty of key operations skills that you'll need to master, too, and they'll be welcomed into any DevOps culture. First and foremost, you'll need foundational knowledge in Linux or a related operating system. You'll also need to know how to create automation between DevOps stages and how to monitor, log, and alert teams once an application is released.

A degree in cloud and systems administration will provide knowledge of and certifications for all of these operational skills and more. Because a majority of DevOps projects are cloud-hosted, it's imperative that IT professionals know server management on industry-standard platforms like Amazon Web Service, Microsoft Azure, or Google Cloud.

Entering into DevOps through an operational pathway will help you develop this knowledge and apply that to IT management, development, and operations.

Another way into DevOps is if you have experience or are currently working as a quality assurance (QA) tester, as QA and testing are cornerstones of the DevOps lifecycle. Up until now, testing has often been done manually, but that's changing rapidly, according to Pavan Belagatti in Hackernoon.

"Manual testing will become obsolete in 2019 and it consumes a lot of time," Belagatti writes. "Automation in testing not only increases the efficiency but also ensures the features are delivered faster to the market."

The main goal of DevOps departments is to automate as much of the testing process as possible, so QA carves a clear pathway into DevOps. Belagatti recommends that testers know how to code so that they can automate scripts and understand different DevOps tools.

A degree in computer science would allow IT professionals to obtain coding and software application certifications as well as training on scripting and automation. These skills can lead you through QA and testing roles to DevOps by giving you the skills you need to succeed in these related IT fields.

Yet another route into the field is through security and network operations. It's becoming increasingly clear that security has often been overlooked in the DevOps process, BeyondTrust writes. And that's to everyone's detriment; even the most seamlessly deployed release is vulnerable to cyberattack without proper security measures. Having the ability to design, operate, manage, and defend network systems is becoming an increasingly important part of the DevOps model.

Earning a degree in network operations and security will equip you with a broad skill set that jibes with DevOps' increased shift to DevSecOps. You'll learn how to keep data systems secure and manage safe operations practices—skills that will serve you well on your way to a successful DevOps career.

Because DevOps is an all-encompassing process that requires professionals to have an especially broad knowledge base, there is no one starter job. Rather, IT professionals will succeed in getting into DevOps by doing as much as they can to gain a breadth of experience across development, operations, quality assurance, and security. More than anything, a DevOps career is about staying true to the integrated and collaborative culture that is at the field's origins.