A $10,000 10th Anniversary Scholarship helps this parapro pursue her lifelong goal of a special education career. 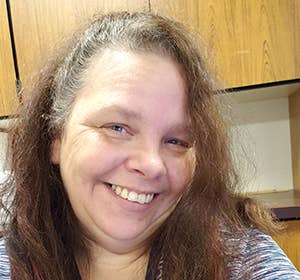 A career in special education has been a lifelong goal for April Brown OBrien. While caring for and educating students with a wide range of disabilities can be incredibly rewarding, it also requires specific qualifications in addition to a degree. For many years, the financial burden that often accompanies the pursuit of a degree served as a barrier between Brown OBrien and her goals. But in December 2020, shortly after enrolling at WGU Indiana, she was awarded a $10,000 10th Anniversary Scholarship and embarked on her journey toward her elementary education and special education degree.

April currently works as a paraprofessional at George Rogers Clark Middle and High School in Whiting, Indiana, and also serves as a coach for the school’s robotics team. She’s always had a heart for teaching and is looking forward to what lies ahead now that she’s enrolled with WGU Indiana.

Learn more about April below and discover how the WGU Indiana 10th Anniversary Scholarship is helping her achieve her dream of being a special education teacher.

What led you to pursue a dual bachelor’s degree in elementary education and special education (SPED)?

I’ve always been interested in being a teacher and have spent a lot of years working in daycares and as a paraprofessional in the school system in Whiting. The first job I ever had in a school system, though, was working at Wilson Elementary School in Illinois. When I was hired, they put me in the special education class; it was a combination of first through third graders in the classroom. Working with the children was amazing, and I quickly learned that interacting with this population requires compassion and patience. I quickly fell in love with the special education class and wanted to be an advocate and a voice for the kids. I also have a son, Eric, who is in special education, so I’ve always had a heart for helping those with disabilities.

What led you to pursue a degree with WGU Indiana?

A few years ago I wanted to pursue this degree, but the financial barrier was there and I didn’t want to have any more loans. But one of my friends, who happens to be a graduate of WGU, went through the same degree program, and I was inspired by her as she regularly updated her progress on Facebook. WGU Indiana’s program seemed like an ideal setting for me since I work full time and coaching the robotics team is almost full time as well. Doing classes online at my own pace has been really nice and everything has been going smoothly. I’ve already passed my first class and have since moved on to the second one. I’m very excited about pursuing this degree and my goal is to try and graduate in two years.

How did you learn about the 10th Anniversary Scholarship?

After talking to a WGU Indiana advisor, I spent time surfing the university’s website looking for scholarships. I spent countless hours during the night looking for scholarships and filling them out. Being a recipient of the 10th Anniversary Scholarship was a huge shock. I was speechless and started crying. As a single mom of two boys who are 23 and 14 years old, making ends meet is hard. And I’ve always tried to steer clear of loans. If it wasn’t for this scholarship, I probably wouldn’t be going back to school. It’s always been a dream of mine to be a teacher and to be my students’ biggest cheerleader.

What did it mean to you to receive this recognition?

It means everything to me. Before I got the phone call that I had been awarded the scholarship, I was about ready to give up. Being a special education teacher has never been about the pay for me; it’s always been about the kids and being that teacher that will think outside the box so I can help them understand a certain subject or project. I know I can be the person that goes the extra mile for them.