The right degree, combined with her remarkable life experience, set Jessica up for her dream job. 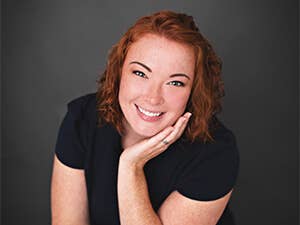 Jessica Schwarz is a WGU Indiana graduate who recently returned from a career with the Peace Corps in Southern Ukraine. Throughout her time at WGU Indiana, Jessica pursued her Master of Science in Management and Leadership, and ultimately her experiences both inside and outside of the classroom led to her discovery of her calling and to finding the dream job she has today.

What made you decide to pursue an education at WGU Indiana?

First of all, the interest and internal debate as to whether to pursue a master’s degree was already something I was wrestling with. The main debate was if I had enough time and secondly, the financial resources to pursue it since it doesn’t necessarily guarantee a businesswoman a higher salary.

My employer at the time had a partnership with WGU in which a WGU representative visited one of our employee benefits fairs. I discovered that WGU did not require the GRE, would waive my application fee, and that my employer offered tuition reimbursement. After that, I figured why not pursue something that future me would thank me for without dealing with the heavy cost?

What was your undergraduate degree in, and what made you want to pursue an MSML degree?

My undergraduate degree was a Bachelor of Arts in Business Administration, with a focus on international business. If I pursued an MBA specifically, I was concerned it would be too linear since my undergraduate degree was in Business Administration. Mastering in Management and Leadership would allow me the privilege of specializing not only in MBA principles, but also mastering the art of leading and influencing people, which I believe is a skill and talent in high demand in today’s workforce.

What have you found to be the biggest benefit of participating in a program that utilizes a competency-based learning model?

I found my program to be very straightforward. I knew what was expected of me, and WGU Indiana staff were always available for questions and assistance. Uniquely, WGU also paired me with a mentor, which meant every Wednesday night (my choosing on availability), I met with my mentor throughout my program. She kept me motivated, was a source for venting frustrations, and also helped me connect with professors or resources if needed. I’m certain I would not have finished this program while working full time in a year and a half had it not been for her.

You recently returned from the Peace Corps—where did you work and what inspired your service?

At 28 years old, I found myself in a successful banking career. I lived and worked in downtown Indianapolis, yet I realized I had not yet quenched my heart to serve in a way that aligned with my professional goals. Coming from an international family and studying abroad in many countries, I had always found the Peace Corps intriguing, and I once had an undergraduate professor serve in the Peace Corps in Africa.

However, my life had gone in a different direction. At 28, I decided to do something for myself.  I lost over 50 pounds and backpacked the Grand Canyon. During this trip, I was looking around realizing that I had no idea how I would ever return to cubicle life. How does one go from being surrounded in such beauty to working inside without windows and four fabric covered walls in an office?

I knew I was being called to something different. So I applied for the Peace Corps and presented my professional and soft skillset. From there, I was accepted and chosen to join the Peace Corps in Ukraine. After three months of training, I was assigned in Southern Ukraine where I served as a Community Developer and was hosted by a Community Foundation. In this role, I served as a community developer, business strategist, financial consultant, public speaker, English teacher, advisor to boards of directors and conflict management facilitator.

How has your MSML degree helped you to advance your career?

Having an MSML degree has given me a level of professional accreditation that has opened doors with peer executives. Professionally, it is generally assumed you have much to offer with an advanced degree, and that’s correct. It also proves resiliency and commitment to bettering oneself and confirms that learning is a lifelong process.

What career goals do you have for your future?

I just accepted my dream job. While serving as a Community Developer in Southern Ukraine, I was convinced that community development was exactly where I needed to be in my career. Unfortunately, I was evacuated from Ukraine due to COVID-19 in March 2020. While my Peace Corps service had come to an end, I was certain I had found where I needed to be in my profession. After several interviews within this field, I accepted the job I had been waiting for. Today, I serve a community foundation in Central Indiana as their Community Developer and focus on creating scholarships for local students while also developing the quality of life in areas where residents are attracted to living, working, and resting.

What would you tell someone who is thinking about pursuing an online degree with WGU?

Do it! It’s the perfect way to pursue your educational goals without the traditional expense of an advanced degree. Plus, you can work through your chosen program as your schedule allows, finishing early or extending it longer. Totally worth it.