It takes a village to create a nurse. 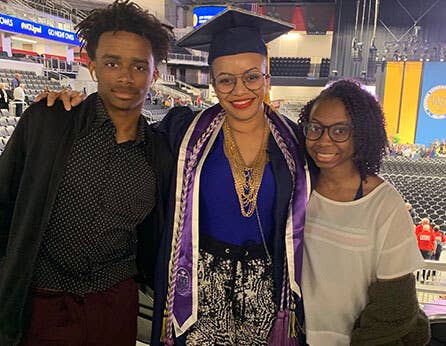 Ayana Russell and her children.

Ayana Russell, an Indianapolis native and practical nurse at Community Hospital East, graduated in July 2019 with her Bachelor of Science in Nursing (BSN) at WGU Indiana. Though the timing was not right for her to go back to school when she initially enrolled in 2013, as her two teenagers grew older and more independent, she found the time and flexibility to begin her career advancement journey at WGU Indiana while continuing to work full-time at the hospital. Ayana is a dedicated mother, co-worker, and artist with high expectations for her career. Though she encountered challenges along the way, Ayana had the support of her mentors, earned several scholarships, and gained the confidence in herself to reach her goals.

Meet Ayana, and let her story inspire you to push yourself to reach your goals, whether it’s furthering your education, advancing your career, or becoming the best version of yourself.

What led you to pursue a degree with WGU Indiana?

I started pursuing a degree with WGU as soon as the college was active in Indiana. I thought the model was great for working adults, so I started the process of enrollment back in 2013. However, the timing wasn’t right for me to start as I still had heavy familial obligations. As my children aged into their teenage years, I figured it was now my time to pursue a degree beyond a Licensed Practical Nurse. The college is geared toward working adults, which meant I didn’t have to drop my work hours or quit my job in order to attend school to better myself. Since I am the sole parent of my family, I have to have a set amount of income and attending WGU allowed me that luxury.

What are your goals after graduating from WGU Indiana?

I have several professional goals that I want to pursue, and I have a plan to knock them out one-by-one. My first goal is to re-enroll at WGU to pursue a Master’s in Nursing Education. Both my mentor and the WGU State Nursing Director have given me positive feedback on mastering this goal. After completion, I would love to become employed with WGU, so that I can give back to rising nursing students like I once was. Having a personal mentor throughout your nursing program is definitely what sets WGU apart from other universities.

How is WGU Indiana helping you reach your goals?

WGU Indiana helped me to reach my goals simply by upholding their model for my program. I was able to continue to work full time and was also assigned a mentor throughout the program. In my last term of the prelicensure program, I was also awarded a couple of scholarships to help relieve the financial burden of tuition. I ran out of financial aid, so the scholarships definitely helped to lift the weight from my shoulders so that I could just focus on studying and maintaining my household.

What challenges have you faced during your time pursuing a higher ed degree?

This page isn’t long enough to explain all of the challenges I faced during the prelicensure program. In the beginning, I was commuting from Indianapolis to Elkhart and South Bend to complete the lab and clinical requirements of the program. I commuted for a year until I was finally assigned a cohort in Indianapolis, thanks to Dr. Mary Carney. My daughter and I also faced health challenges as well as financial challenges to pay tuition and maintain household obligations. Without going into grave detail, the challenges that I faced were both stressful and mentally taxing, and I wouldn’t have been able to continue without my concrete support team. It takes a village to create a nurse.

Tell us about a mentor in your life. What role do they play in supporting your higher ed and career pathway?

I have a few nursing mentors in my life who had my back and tirelessly pushed me to finish. My mentors include Kim Cooper, President of the State Board of Nursing, Shauna Wise, WGU student mentor, and also Dr. Mary Carney, WGU State Director of Indiana. I look up to all of these nurses in different ways, but mainly because they see things in me that sometimes I don’t see in myself. They have really helped boost my confidence in knowing that I CAN instead of I CAN’T.

What advice do you have for others with similar stories looking to further their education and career?

My best advice is to never give up. No matter how cliché that sounds, it is so true. There were many times when I wanted to give up, but I just kept looking at the WGU pre-licensure calendar and saying to myself, “I can do anything for X number of months, days or hours.” I had to constantly push out thoughts of quitting because that just was not an option. Also, utilize your mentor! I can’t say that enough. Your mentor is there for more than making sure you are on track during the program. Most of my phone calls with my mentor were about life situations, not just on the topic of school. That helped me work harder and smarter.

Just for fun, if you could be anything what would it be?

I would definitely want to have a home studio, so that I could submerge myself in all of the interests in arts that I have. I love to refurbish furniture, create wall art, calligraphy etc. If I could figure out how to tap into that genre full time and make a decent income while doing it, I would be sitting in that studio right now.