Helping build the university community statewide is important to the WGU Washington staff. In addition to actively “repping” the @wguwashington handle on social media, events are frequently held in various locations across Washington giving students and graduates a chance to meet up with other Night Owls in their area.

In that spirit — and to shine a bright light on WGU Washington’s robust scholarship program — the university recently launched its Community of Scholars Series. Its inaugural event celebrated scholarship recipients from the King and Pierce county area at Kent’s Airways Brewery. Joining the festivities was Mayor of Kent (and WGU Washington alumnae) Dana Ralph — as well as current and former WGU Washington students. 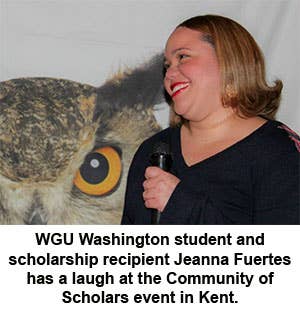 To see an album of photos from that event, visit the university’s Facebook page. And if you’ve been awarded a scholarship from WGU Washington, you’re welcome to attend a Community of Scholars Series event in the coming months. Keep an eye on your email for an invitation. Below is a tentative list of cities the series will visit in 2018: