As a little girl growing up in the Eastern side of Africa, Eritrea Habtemariam would never have dreamed that she’d someday be living on the other side of the world, working as a telemetry nurse and graduating from WGU Missouri with a master’s degree in nursing leadership. But, with her strength and through the support of her family, she has achieved the American dream, despite facing many obstacles. 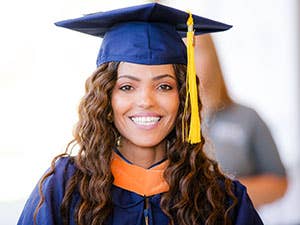 Eritrea’s mother was originally from Ethiopia, while her father was from Eritrea — a country in the horn of Africa that is bordered by Sudan to the west and Ethiopia to the south. Her parents settled in Ethiopia, but her father was forced to flee to avoid persecution when conflict broke out between the two countries. Eritrea’s mother packed up Eritrea and her brother when they were just five and three years old to make the long journey to Sudan to reunite with her father.

“We made the nearly 500-mile journey in just over 30 days, traveling mostly by foot until the bottom of my shoes fell out. We traveled by night and slept by day to avoid being captured or getting caught in the crossfire.”

Eritrea and her family were among the thousands of refugees displaced due to war, famine and unrest. “I remember taking refuge in a makeshift camp, filled with hundreds of other refugees, in the middle of nowhere. Our journey had become very difficult and, at times, hopeless and endless. My brother had gotten ill and almost lost his life, but we all finally made it to Sudan and were reunited with my father.”

Traveling to Sudan meant saying goodbye to the rest of her family who were still living in Ethiopia. “At the time, I did not realize I was leaving behind the most important and influential people in my life: my grandmother and my uncle who raised me with so much love and support.”

Six years after arriving in Sudan, Eritrea’s world was once again turned upside down when she, her brother and parents had the opportunity to come to the United States as refugees. “Like most immigrants, my parents migrated to the U.S. to give my brother and me a chance at a better life — an opportunity to do and become more than they ever imagined for themselves.”

Eritrea’s parents taught their children that with hard work and dedication, there was nothing they couldn’t obtain in life. This mentality guided Eritrea as she adjusted to her new life as a fifth grader in America. “I did not know any English; therefore, I could not communicate with my teachers or classmates, and I felt lost in a sense. But watching my parents overcome their struggles made it clear that mine did not compare.”

Then at 16, tragedy hit when she learned her grandmother — who had still been living in Ethiopia — was hit by a drunk driver and killed. “It was by far the worst time of my life, but I had to learn to draw from that very seed of courage, strength and resilience she planted in me many years ago. At that moment, I decided whatever I do in life, I want to help others. I did not know it would to be nursing at the time, but now I can’t imagine doing anything else.”

As a telemetry nurse at SSM St. Mary’s Hospital in St. Louis, Eritrea cares for patients with a variety of heat-related illnesses. “I have the honor and privilege of taking care of people at their most vulnerable time. I have cried and laughed with my patients, but most importantly, I have learned to be humble, patient and compassionate.”

As a single mom to three children, she already had her BSN and a good job but wanted to continue her education so she could make a difference at work and also set a great example for her children and show them they can do anything they put their mind to. She felt overwhelmed at the thought of adding schooling to her busy life, but her father helped encourage her. “While I considered my circumstances as an obstacle, my father never did. He showed me a different perspective – to be courageous and take the leap, even if I didn’t succeed.”

Eritrea has excelled at WGU Missouri. She feels its competency-based format has worked for her. “One of the most appealing things I found was that you are able to accelerate your courses if you choose to."

Eritrea believes that the degree she has earned from WGU Missouri will be key in helping her continue to succeed in life. “As my journey at WGU comes to an end, I believe I have gained the knowledge to become a better nurse, a leader and an educator. I know without a doubt my life’s journey is and will always be to serve others with love, compassion, dignity and understanding.”