At WGU Nevada we want to take this time to honor some amazing alumni from our rural towns.

When people who are not in Nevada think of the Silver State they usually imagine Las Vegas, very rarely, Reno. Naturally, it’s because these cities are the two urban hubs in northern and southern Nevada. However, Nevadans know how rich the landscape of the state really is and how a rural way of life is honored and cherished. At WGU Nevada we value the state as a whole and want to take this time to honor some amazing alumni from our rural towns.

Mara currently lives in Dayton, Nevada, which is east of Carson City.  She moved from California to Dayton in 2013 and loves living there. The community, specifically the Lyon County School District that she works for, is incredibly supportive in assisting employees who are seeking higher education.

She chose WGU for two reasons: affordability and the semester formats allowed her to take as many courses as she could handle. In fact, she fast-tracked the program and finished all the coursework required in 8 months. In addition to the format, with WGU Nevada solely online, she was able to fit education into her already busy schedule as she pursued being a teacher.

She plans to stay in Dayton and was offered a paid internship in the school district! Congratulations Mara!

Lisa moved to Elko, Nevada, from Cedar City, Utah, to live with her brother who works for Barrick, now called, Nevada Gold Mines. She quickly adapted to living in Elko and went on to say: “Something bonds people together out here.”

She chose WGU for several reasons, one being that it had a mentor program. Her mentor, Chris, stays informed on Lisa’s schedule, cheers her on, and truly cares about her success. She also chose WGU because she knew from the start that the program was organized and had simple, straightforward formats for each of the classes.

She accepted a job with a local law firm and has plans to be an HR Professional. She also received a scholarship from WGU Nevada, Priority Applicant Scholarship, which helped her afford the education she dreamed of. A single mother who is also balancing school and work, Lisa is proud of her accomplishments and so are we!

Jala and her husband were born and raised in White Pine County, smack in the middle of the state toward the eastern border. After graduating high school, she attended Brigham Young University in Provo, Utah before returning to White Pine County to be a teacher. She loves White Pine County and although she has had many opportunities to leave, she has chosen to stay where she feels at home.

When she chose to return to school, WGU wasn't one of her initial choices. After a lot of research, she became attracted to the competency-based courses and set term tuition that would allow her to save both time and money. Her four-year degree will be done when before her two-year mark.

She is already using her education from WGU to work at a high school and plans to continue for as long as she can. She is looking forward to being a licensed teacher and we cannot wait to her of her many successes!

Scott lives in Fernley, Nevada, and has completed her master’s in educational leadership through WGU. Way to go, Scott!

He has always lived in Fernley. He enjoys the fact that the growth of city is similar to his own personal growth. His wife first began her degree with WGU Nevada and while witnessing her experience and the flexibility of the program, he decided it was time to go back and get his masters. Having a program mentor, Melanie, helping him kept him motivated and on track. He loved it so much he is pursuing a second master’s degree.

Scott plans to stay in Fernley and use his degrees to apply for open principal jobs around the district. using his education from WGU, he will likely make an impact on the community that has given so much to him. He has been an educator for over a decade plans to do even more to help is district and community.

Jaime lives in Winnemucca, Nevada, and is currently working on her Educational Leadership Endorsement and even received the Women in Leadership scholarship to continue her education. What a deserving recipient, we are so happy for her!

She has always lived in Winnemucca and traveled to Reno previously to go to the university there, but she came back to the community she loved to be closer to family. Teaching and living in Winnemucca really helped her understand and respect education in the rural areas.

There was a student teacher who had previously gone through the teaching program at WGU, inspiring Jaime to pursue it too. After doing some more research on WGU it seemed like the most efficient way to work on her license as it offered the best pace and pay per semester. Being solely online also allowed her to stay in Winnemucca, the community she plans to not only stay in, but use her education to support.

We are so proud of all these students and their amazing accomplishments. Share yours with us too! 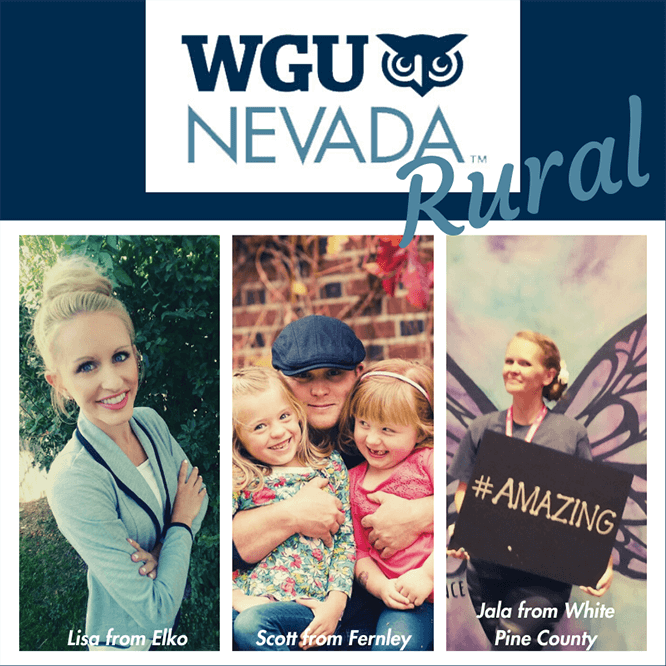