Bobbette Fagel promised her father she’d get a college degree. 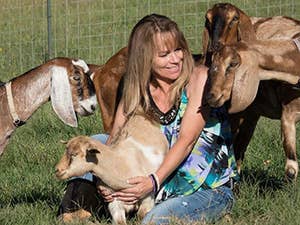 Bobette Fagel and some of her goats.

Each of those terms individually might elicit a certain image. But combine them all together and you’d find a very specific individual—Bobbette Fagel of Ruffin, an unincorporated community in Rockingham County, North Carolina.

Bobbette not only is an Information Security Advisor for National Government Services, a subsidiary of Anthem that serves federal healthcare agencies, but she and her husband also own and operate Briar Creek Farm, a 52-and-a-half acre farm that specializes in raising three breeds of goats. In her spare time, she makes goat milk soap and lotion. Oh, and she earned a master’s degree from WGU last spring.

Reading all of this, you might think Bobbette is an overachiever. However, her prospects didn’t always look so promising. Married at 19 and a mother at 22, she had put off college to raise a family and work full-time. Her father, Bob Cassingham, was always a big proponent of education and encouraged her to go back to school. She promised him that she would get her college degree.

Let Bobbette recount that time in her own written words.

“It all started in 1994. I decided it was time for me to return to college as my sons weren’t little babies anymore, but rather ages two and four. My dad was my college cheerleader. He called me every night after class to see how I did on a test or a quiz, or just to see what I learned that evening. He was my rock. But then I became my dad’s cheerleader as he battled cancer.”

Bobbette’s mother and father lived just down the block, and she would often bring her college textbooks with her to study in his room just to be near him while he was recuperating from chemo treatments.

“Fast forward to December 1996, the week prior to final exams. My dad, my rock, took a turn for the worse. He died December 9th. I called my professor to let him know that I would be attending my dad’s funeral rather than taking my final exam.”

The following semester, Bobbette was having a hard time focusing on her studies. After class, she would cry the whole way home. Her dad wasn’t there to call her, to ask what she had learned that day, or to congratulate her on passing another exam. Overcome with grief, she dropped out again.

Many years later she did return to school, earn a bachelor’s degree, and land a good job. Her coworkers were looking into WGU and she decided to enroll in the master’s program in Information Technology Management. “It wasn’t easy, even though I’d been in the field for many years,” she said. “However, I had the best mentor—Tammy Willcox. She pushed me a lot.”

As Bobbette was preparing to graduate, her thoughts turned to her father.

“As I completed the documentation for commencement, I once again had tears running down my cheeks. The salty liquid pooling on the edge of my laptop, dripping down my desk. I yell up to him from deep inside my head … DAD! I did it! I’m graduating! Not with one degree, but with my second degree since you cheered me on, since you called me to make sure I aced that exam. Dad, I did it! I did it for myself and I did it for you. I hope you are proud of me!”

Bobbette was preparing to attend WGU’s commencement in Charlotte in March of 2020 but then life threw another monkey wrench into her plans. That event was canceled due to COVID-19. She’s hoping that it will be rescheduled one day in Charlotte since it’s within driving distance, and in her own words, “We can’t leave the farm for too long. My boys are grown up but we’re about to adopt a nine-year-old girl. My life is hectic!”

On top of all that, she’s now pursuing a Master of Science degree in Cybersecurity and Information Assurance from WGU.

When asked what advice she would give to anyone contemplating going back to school, she says simply, “It’s never too late. With WGU, it’s easier to get your degree while working full-time. The way the program works, even if you can only fit in a little bit of study time here and there, you can still do it.”

We have a feeling Bobbette’s father would approve of that advice. And that he’d be extremely proud that she not only kept her promise but continues to excel in her educational pursuits.