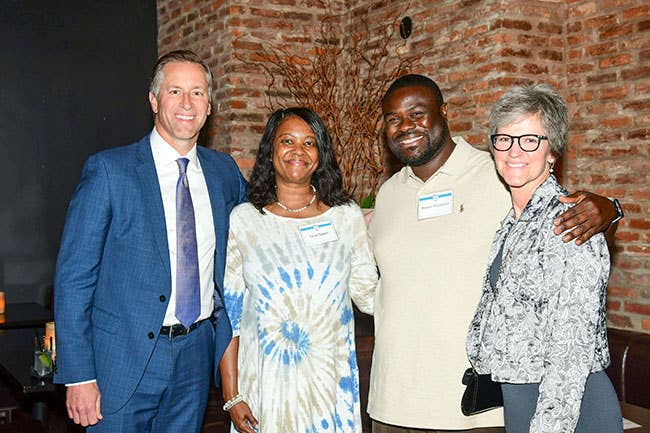 Many Western Governors University (WGU) students have children and understand the time, resources, and challenges of working full-time while parenting. Single parents have the additional challenge of taking care of everything and everyone alone. Career and educational aspirations are some of the many things that get moved to the back burner so their children's needs can be front and center.

Growing up in Alabama, Marqus Hutchinson watched his mom, Tina Oden, struggle as she raised him and his two brothers alone on her $14,000 salary. She was 16 years old when she had Marqus. When he graduated from high school, Marqus knew he wanted a different path for his life. He joined the Navy, served in Iraq and Afghanistan, and was promoted to Chief of Watch.

As Marqus reflected on his time in the Navy, he said, “I learned everything about every technology around me. I read, learned, and practiced, and then I read, learned, and practiced some more. By the time I came home from the Navy, I knew a lot about computing, technology, and security, but I didn't have a degree.” Marqus enrolled in several universities, but it wasn’t until he found WGU that he had a perfect match for his schedule, experience and learning style. He achieved his B.S. in information technology management in 2005.

Marqus’ mom raised his two younger brothers in Alabama while he was in the Navy. She worked full-time in the healthcare field and attended a local community college for a few years, trying to achieve her long-held dream of a college degree. As a single mother, this proved challenging. After Marqus got his degree from WGU, he encouraged his mom to consider WGU as a viable option for continuing her pursuit of a college degree. She tried it and loved the online learning environment and support WGU provided. 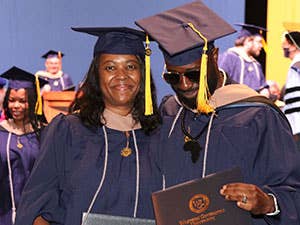 Tina finally achieved her dream of obtaining a college degree with her B.S. in Human Resource Management in 2018. With her bachelor’s degree now achieved, Tina continued her dreams of earning an M.B.A. in Healthcare Management at WGU, which she completed in 2020. She walked in the May 2022 master’s degree commencement ceremony in Philadelphia with one of her other sons, who Marqus also convinced to give WGU a shot.

Marqus, a Northeast Alumni Advisory Council member, knew it was possible to fund and name a WGU scholarship after a loved one. He wanted to honor his mother’s life and achievement and inspire and help WGU students, so the Tina Oden Scholarship will be awarded to single mothers studying at WGU selected through the scholarship application process. With the scholarship in mind, Marqus said: “My mother wants to be involved with WGU in any way she can and is very eager to help others." We’re glad to help others through her scholarship and hope all the single parents out there know that we see them and are grateful for all they do.

To find out more about how you can support WGU students in the northeast, email Jenn. WGU employees can donate via the Intranet.

Is HR a Good Career? Six Signs It Suits You

Discover the world of HR, and see the top reasons to pursue a career in Human Resources

What Is a Human Resources Degree?

Find out what a human resource degree is and the types of jobs you can pursue with it.