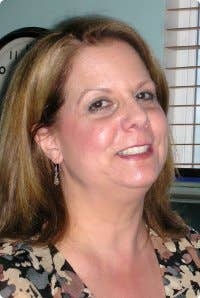 Vicki Morales, a married mother of two from Tooele, Utah, had spent 14 years working in the food industry, when in 2009 her boss called to say that the downturn in the economy was forcing them to eliminate her position.

"I thought, ‘I need to do something!’" Vicki said. So she started taking classes for medical coding. "I discovered I really liked the medical field."

As she was researching jobs and the outlook of various industries, she discovered health information management, found WGU’s program, and gave an enrollment counselor a call.

Today, she’s working with veterans at a Tooele hospital, helping them as they file compensation claims. The quality of the education she’s receiving at WGU has directly impacted her ability to excel in her job.

"The terminology I’ve learned in my WGU courses—all that is coming into play," Vicki said. "I understand what they’re going in for, what the exams are for. It’s given me a better comprehension for what my job requires."

In making the decision to go back to school, Vicki had to weigh a lot of decisions to make sure she found the best fit. As a busy working mother, she needed flexibility. She couldn’t be constrained to be in a certain place at a certain time. The derailment of her previous career added urgency to her need to get through her program as quickly as possible. And it needed to be affordable, to fit into her family’s budget.

"I’ve been ahead of schedule, been able to get a few extra competency units in per semester," she said. "I’m not being held back by the class structure, and when I need a little extra time I have that time as well."

In addition to the career opportunities opened up by her WGU education, Vicki sees added value for her family in the example she’s setting for her 6-year-old son.

"My husband and son see the advantage of my degree. They see the value of an education." It’s an example she wants to share beyond her family. "I want to be an encouragement to other women who think they’re too old to go to school. Go for it! It’s possible to get it done. I’m in my 50s. I always promised myself I’d go back to school and get a degree. I didn’t know it would be 30 years later. I guess I was waiting for WGU!"

And she added that the support she’s received from WGU’s staff has solidified her love of the school.

"The follow-up from WGU has been excellent," she said. "Anytime I have a question about anything, either my mentor, the course mentors, the financial aid officers—anybody—they get back to me in a very reasonable amount of time. That was one of my concerns when I signed up. They were so responsive when I was enrolling, but I wondered, ‘After I enroll, will they still be that responsive?’ They absolutely have been. To me, that speaks a lot to the integrity of the school."

Vicki’s goal is to graduate in December 2013, and she wants to go on and get a master’s degree from WGU right away.

"I’m afraid I’ll get bored. I’m in that mode to study and learn!"