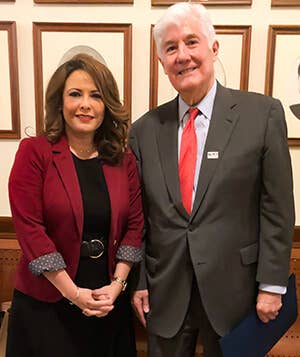 From September 15 to October 15, Americans observe National Hispanic Heritage Month to celebrate the histories, cultures, contributions and accomplishments of their ancestors who came to the U.S. from Mexico, Spain, the Caribbean, and Central and South America. As we celebrate Hispanic Heritage Month in Texas, we recognize that the Hispanic population is growing faster than any other large ethnic population. A study by The Economist predicts by 2050, Hispanic workers in Texas will outnumber white workers by almost three to one. However, without increasing the educational attainment rates of Hispanics, the state will be poorer and less competitive as there will be fewer workers with the knowledge and skills needed to meet the demand for high-skilled, high-wage jobs.

Prior to joining WGU in April, Linda Battles worked for 15 years with Dr. Raymund Paredes, the first Hispanic to serve as Commissioner of Texas Higher Education from 2004-2019. As Commissioner, Dr. Paredes worked tirelessly to increase the enrollment, persistence, and completion rates of Hispanic, low-income, and first-generation students by promoting statewide higher education policy to increase affordability, reduce costs, expand competency-based learning, and shift from a faculty-centered model to a student-centered one.

Linda recently sat down with Dr. Paredes to talk about his experiences growing up in El Paso, early influencers, and career expanding access and contributing to the success of Hispanics in higher education.

Let’s talk about growing up in El Paso, Texas. Who encouraged you to go to college?

I don’t remember a time when I was not expected to go to college by my family, notably my paternal grandfather, with whom our family lived. He was a great storyteller who regularly excited my curiosity and love of reading. When I came home to El Paso from the University of Texas for holidays and summers, my grandfather would wait for a report from me on my academic progress and status. He wanted to hear directly from me that I was doing well academically and on track to graduate in four years. My father’s role in my family’s college-going culture was to underscore the importance of education regularly and to lament to his children that he never went beyond high school. My mother was an intellectual who was a voracious reader and closely oversaw her children’s educational experiences. I also had many teachers all through grades 1-12 who encouraged me to think about college, but they were primarily reaffirming a value I already had acquired from my family.

Like all great leaders, you had several mentors along the way. Who inspired and supported you during your career?

I place my mentors in two categories, scholarship and academic administration.  The most important under scholarship has been Americo Paredes (no relation), a celebrated professor of anthropology and English at UT Austin. He emphasized hard work, clarity and precision in scholarship and greatly influenced much of my own academic work. The second is William Goetzmann, a professor of history and American Studies at UT Austin and a champion of academic and intellectual rigor. Very demanding.

As an administrator at UCLA, I had three extraordinary mentors: Winston Doby, a vice chancellor for student affairs at UCLA who taught me that universities are all about students, a point that seems a no-brainer until you see how universities are actually run; Charles E. Young, chancellor of UCLA for nearly 30 years, a brilliant manager and a natural leader who listened to his senior administrators and then made tough decisions, never losing his poise; and Karl Pister, chancellor of UC Santa Cruz who is perhaps the most honorable and decent man I have ever known, a person of matchless integrity. He treated everyone with respect and dignity and taught me that you can reach the top of your profession without compromising your values.

You’ve spent a career expanding access and success of Hispanics in higher education. What’s the most important thing needed to ensure all people, regardless of their race, ethnicity and socioeconomic status, have an opportunity to access and earn a high-quality postsecondary credential?

At a minimum, anyone interested in a higher education credential needs two essential characteristics for success: a solid academic foundation and adequate financial resources. As an abundance of research shows, access without preparation is not opportunity and financial stress is a major cause of academic failure or non-completion. Unfortunately, achieving a rigorous academic foundation is often difficult to achieve for many students from low-income families. They often attend low-performing schools and often have no idea that their schools have not prepared them for college until they arrive on campus and can’t do the work. Lack of adequate financial resources is not as difficult to deal with because of the widespread availability of grants, scholarships, loans and work-study programs. For all students considering financial assistance of any type, good financial advising is essential.

What are some of the barriers to higher education access and success for Hispanics and strategies for overcoming them?

The lack of correct information about higher education is also a barrier to Latino students. As various studies have noted, Latino families are often unfamiliar with such basic facts as the differences between community colleges and universities, how to select an academic major, job market information and variations in academic quality and prestige from institution to institution. Because of their lack of information about higher education, Latino students often fall victim to ‘mismatch’ which refers to those students who enroll in institutions far less prestigious and rigorous than their academic records would suggest. Clearly, getting accurate information on higher education in the hands of Latinos is key to raising Latino educational attainment. Another recommended strategy is enrolling more Latinos in high-quality dual credit courses.

What’s the importance of institutions like WGU as a pathway to opportunity?

The affordability of WGU, the access provided by online instruction and the opportunity to complete a degree program according to your own schedule because of competency-based education would make WGU attractive to Latino students. They just need to learn about the school.

What advice do you give to Hispanics who want to pursue a postsecondary education credential?

Take the toughest courses in your school with the toughest teachers. Take rigorous dual-credit courses. Get a well-rounded education in high school with courses in the liberal arts, science and math regardless of your planned major. Read the online catalogues of colleges you’re interested in. Visit with your high school college advisor, especially to talk about financial aid. Go to the best school you can get into. WORK HARD!!!