Former Marine Finds the Right Fit in IT

Brandon was intrigued by the rigors of the cybersecurity field, a track that many of his fellow veterans end up pursuing.

Brandon Shaver will be the first to tell you he does not back down from a challenge. In fact, the College of I.T. student relishes challenges and will usually choose the tougher path. His particular path has a few zigzags, which many of our students can relate to. Finding the right fit—both for your education and job—can be a challenge in itself.

After leaving high school in Montana, Brandon was contacted by military recruiters. After a few discussions with the recruiters, Brandon decided he would sign up to serve. He knew the Marines are considered the most difficult branch, so of course that is where he wanted to be.

“The Marine Corps is hands down the hardest,” recalls Brandon. “So, for whatever reason I have to choose the hardest path. It just seemed like a huge physical and mental challenge.”

Brandon served for four years with the Marines. He deployed once with the Navy to the West Pacific and went on another tour to Kuwait, both in direct support of Operation Iraqi Freedom. After finishing his tours, Brandon went back to school to earn his associates in electrical maintenance.

“My dad was an electrician, so I kind of grew up around the electrical thing and I thought that's what I wanted to do. I did that for like a handful of years, but culturally that just didn't mesh well with my personality.”

During his time with the Marines, Brandon relished the opportunity to travel and experience new cultures. A love of travel was something he shared with his wife, so they investigated jobs with a major airline that would support their traveling lifestyle. 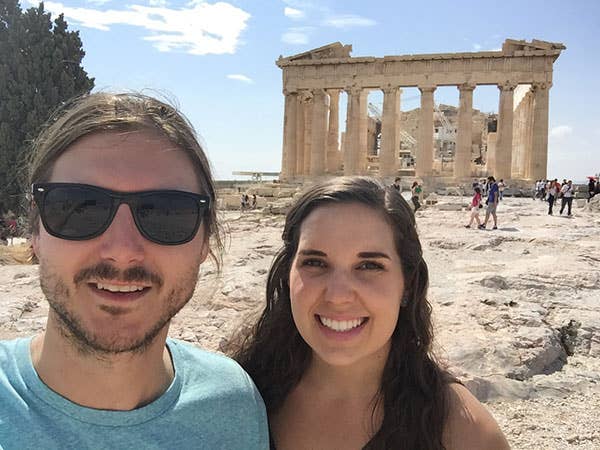 Brandon and his wife, pictured during a visit to Greece.

“I applied to Delta Air Lines for what was supposed to be a three-month seasonal job that segued into a six-and-half year adventure where we were able to fly all over the world and experience beautiful places like Greece, Argentina, and Spain.”

Unfortunately, Delta was hit hard by the pandemic and was forced to lay-off employees. The airline offered a generous severance package to those willing to voluntarily leave the airline, which Brandon accepted.

After spending some time at their home base in Seattle, building on his hobbies and connecting with family, Brandon knew it was time to go back to school to build some skills for a new career trajectory. He already had an interest in I.T. and had been wanting to complete his bachelor’s degree for several years.

“In January of this year, I decided it was time for a career change into the ever-evolving world of tech. For me, in this period of my life, WGU just made the most sense. It was kind of a no-brainer.

“I think that the thing that really differentiates WGU from the other schools is that I can do it at my own pace, like I've already finished five classes and I've been in the program for a month. Then one of the biggest benefits is that it comes with industry certifications and the other schools I looked into didn't have that option, so that would be something I would have to go and on my own.”

Brandon was intrigued by the rigors of the cybersecurity field, a track that many of his fellow veterans end up pursuing.

“I've been wanting to finish my bachelor’s degree in general for way too long and I also want a career that's actually going to pay me a living wage for Seattle. I want a career with the opportunity for advancement, longevity, and growth—and of course one that’s more of a challenge.”

WGU Washington is making it easier for Brandon to complete his bachelor’s in information technology through the Military Appreciation Scholarship. The scholarship is available for active-duty military personnel, veterans, and their spouses looking for an opportunity to advance their education. It's one small way we can say "thanks" for your service, your sacrifice, and your commitment to our country's future.