WGU’s Secret to Success: Mentors Who Have Your Back

“This is like the secret ingredient that nobody knows about that’s changing everything.”

So says GK Morell when asked to explain his role as a program mentor at Western Governors University.  Morell has been a mentor at WGU Washington for seven years in the Business College. Prior to becoming a Night Owl, he was an academic advisor at several colleges, including the University of Washington and North Carolina State University. He’s worked with students since 1992 and said WGU’s higher education experience with its personalized mentorship program is a game-changer for people finding real success in their desired career path.

He begins by telling his students that he is here to encourage and support—not babysit or micromanage.

“I think the key is doing a good job on those initial first conversations and letting them know that it’s truly about a mentor relationship where you get direct coaching that is individually tailored to you,” he said.

While other universities assign academic advisors to students, WGU has chosen a more specialized approach by instead assigning every incoming student a program mentor.  These mentors are faculty members who have experience in the field their students are studying.  They provide students with one-on-one guidance throughout their studies. Along with helping students create a course plan for each term and understand the university’s policies and procedures, program mentors also help their mentees stay motivated and on track to complete their degrees.  All of Morell’s current students are majoring in human resources, which he himself worked in for five years. This enables mentors like him to specialize solely in one field instead of trying to juggle multiple majors like other academic advisors do. 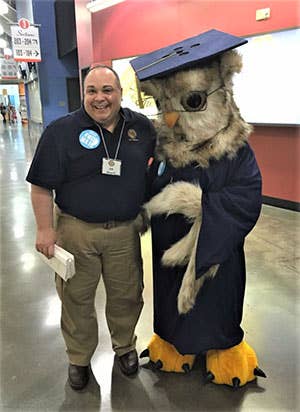 “In the past, I've done engineering curriculums and general education curriculums. I think at NC State we had to know all 256 programs, and we were tested on a regular basis,” he said.

Those in the WGU community often refer to the mentorship program as one of its “secret sauces.” Morell said there’s one special ingredient that elevates the program even higher.

“We are specialized and trained by WGU to really understand the pathway to graduation, and we work with students at different levels,” he said. “Some of them are accelerators, and they're able to academically move through the curriculum at a faster pace. Others need a little bit more hands on.”

The key to success, Morell said, is that they must make the time for their studies, no matter what.

“Sometimes you’re going to have to miss out on those fun things you want to do,” he said. “You will have to make sacrifices.”

Many of WGU’s students are working adults, which means even more juggling and sacrifices.

“You just have to keep on reminding them of their vision and why they're doing this,” he said. “Because you will have better opportunities. You can apply to higher level jobs, and you can have different conversations that hopefully institute some change within your workplace.”

The hope for great change was what drew Morell to WGU in the first place. During his 20-plus years of working in academia, Morell saw some students never graduate or graduate at 7 plus-years. His first mentee at WGU graduated in just six months thanks to WGU’s competency-based education model, which measures skills and learning rather than time spent in a classroom. Students progress through courses as soon as they can prove they’ve mastered the material, rather than advancing only when the semester or term ends. If other students need extra time due to life circumstances, than WGU and the mentors will help guide and accommodate those challenges. Like his students, Morell says mentors must also embrace a passion for learning.

“You have to be pretty curious intellectually to do this position because the answers are not just laid out for you,” he said. “You sometimes have to do extra research to find out how to guide them best.”

Morell has helped his students navigate through break-ups, health challenges, homelessness, and a global pandemic. It’s during the most challenging times that he and his mentees have truly bonded, despite working together remotely.

Even though the mentorship program is fully remote, Morell has met many of his students at graduation, pre-pandemic. With commencement slated to return to an in-person event this summer in Seattle, Morell said several of his students have already told him that he better be there. He swears nothing will stop him from showing up to meet his students in person—some whom graduated 18 months ago.

“That is a total reward to be able to sit down with them and to see their growth. I just had lunch with one of my former students who used to answer the phones at her workplace,” Morell said. “She told me how they put her in the lead position at her company and how that meant a $20,000 increase in salary.

“Totally transformative. It has changed her and her family’s life in so many ways. It’s just beautiful to see that.”

By Courtney Dunham, Communications and Public Relations Manager for Northwest Operations. For media or other inquires, please contact Courtney at 206.388.8926 or courtney.dunham@wgu.edu