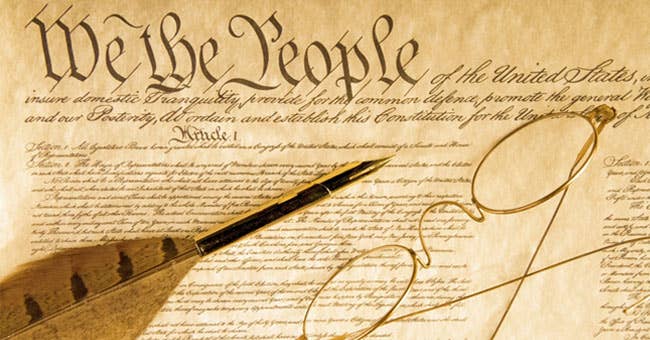 Join us to celebrate the 227th anniversary of the U.S. Constitution the week of Constitution Day 2014 with a series of free WGU webinars.

At the time each webinar is schedule to begin, follow these steps to participate:

Is it time to revisit the U.S. Constitution?

Article 6 of the U.S. Constitution establishes that it is the "supreme law of the land," and for 227 years, the three branches of the Federal Government have been guided by it, interpreted it, and even amended it as the country has grown and faced challenges that the Framers could not have imagined. A product of substantial compromise and the influence of Enlightenment ideas, is the U.S. Constitution really the ideal way to organize a pluralistic, representative government in the twenty-first century? Are there parts that are anachronistic, or ambiguous? Does the Constitution define our values as a country, or do we understand the Constitution in terms of our values? Other countries have borrowed from the Constitution over the centuries. Are there any lessons they've learned that could improve our founding document? Join Drs Chittick and Douglas, and Mike Dungar as we look at the founding document of the United States, consider how it has been amended, and pose the question for discussion: "Is it time for us to revisit the U.S. Constitution?"

The 14th Amendment has played a vital role in immigration policy in the late 19th and early 20th century. We will discuss the importance of the 14th Amendment by considering Asian immigration to the United States. Federal legislative and juridical policy made it impossible for immigrants from Asia to become citizens through naturalization because they were considered "non-white." Federal laws also restricted the numbers and types of immigrants from Asia through the establishment of exclusionary laws and a quota based system. Barred from naturalization, Asian immigrants were perpetual aliens subject to restrictive state and federal laws. The children of these immigrants from Asia became U.S. citizens through the 14th Amendment. The rights that these children received as U.S. citizens played an important role in establishing immigrant communities. We will explore immigration policy and several Supreme Court cases that dealt with the conflict between the intent of federal immigration policy and the 14th amendment. Join Dr. Emily Morishima for a discussion of the importance of the 14th Amendment's citizenship clause in the late 19th and early 20th century.

Of Culture and Citizenship

Citizenship is not simply bestowed upon citizens. While official legislation may be passed to grant these rights, nations utilize a multi-faceted approach to cultivate civic identity. This interdisciplinary panel will explore how citizenship and civic identity have been culturally produced through parenting, food and cooking, and parades, pageants, song, art, and other ephemera.

Geography, Congress and the U.S. Constitution

The U.S. Constitution established the House of Representatives as the elected voice of the people. For the past 215 years, most U.S. states have adopted single-member districts as the preferred path for House of Representative elections, and the 1967 Uniform Congressional District Act standardized this practice nationwide. However, the longstanding public debate over our electoral system exposes the geographic concerns that guided the drafters of the Constitution. In this panel, we examine the trade-offs between presidential, parliamentary, and recent 'hybrid' electoral systems and then consider how the U.S. Congressional election system both reflects and at times generates intense political concerns, such as gerrymandering, district packing and cracking, and other electoral practices that critics suggest undermine our democratic foundations.

Do you trust Government? What's your opinion of your Senator or Representative? In one current opinion poll most Americans say that 'no matter how bad things are, Congress can always find a way to make them worse'!? For another new LOW, only 25% of Americans believe they should re-elect their Senator or Congress member. What do you think? How will this affect the upcoming Midterm elections in November? Which political party could end up controlling the U.S. Senate? Let's discuss how current opinion polls can predict and affect this year's elections.

The ability to vote is amongst the most cherished American values. It is enshrined in popular culture and is a core element of our political socialization beginning as early as pre-kindergarten. But does the dream of free and fair elections reflect in the reality of American democracy? Recent studies have forwarded the provocative idea that the American voter is a low information voter that relies on television as their source of news information. One could argue that receiving news information from television is akin to using Cheetos as your daily source of dairy, Should there be a literacy test that joins the new restrictions on voting based on identification? Join Dr. Lee Jones as we discuss the intellect of the American voter.

Since the publication of On the Social Contract, Rousseau's political philosophy has been very influential. Although the founding fathers were influenced more by Locke than Rousseau, what Rousseau had to say about freedom and equality are very important for the ideals of liberal democracies. This presentation will focus on the issue or problem that first led to Rousseau's interest in political theory (inequality) and also focus on the solution to this problem (his version of the social contract). There will be some comparisons made between Rousseau and Locke and also some speculation as to how the U.S. Constitution may have been different had Rousseau been more influential to the founding fathers.

Alexis De Tocqueville was sent by the French government to the United States in 1831 to study the American prison system. While he did complete the report on prisons, he also completed a larger and more general work "On Democracy in America" that remains a compelling analyses of foundations of democracy. This presentation will focus on Tocqueville's observations concerning religion and its influence and place in American life.

The concept of democracy had a profound effect on the structure of religious organizations in the early United States. It is not a coincidence that the Jacksonian period witnessed both an expansion of the franchise as well as a proliferation of new religious groups, like the Shakers and Mormons, and the splintering of other dissenting denominations, like Baptists and Methodists. Democracy and the separation of church and state allows individuals to not only join the religion of their choice, but to explore and create new faiths and religious traditions. This talk explores some of the more unique schisms, religions, and cults in our history to illustrate how the concept of democracy has affected American spiritual culture.

"The Psychology of Political Extremism"

Surveys document that Americans' political attitudes are become more extreme. What are the psychological processes that underlie ideological extremism? We will review experimental and observational research that aims to understand the phenomenon. Come join us for a discussion on what extremism is and where it's going.