A professional chef with a culinary arts degree makes sense—they need to know how to cook.

But there is another very important skill set that a chef will need to run a successful kitchen or own a restaurant, and that’s in business. With 19-plus years of experience in the field, Chef Instructor Christian Markussen knew the best way to reach his professional goals would be to further his education and obtain a bachelor’s degree in business. 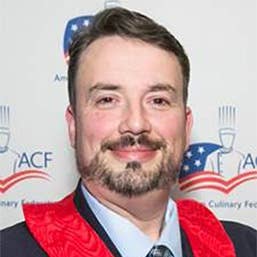 This past February, it became evident that Christian’s choice to master the business side was well worth it as the WGU alum was named the best culinary educator in the Southeast by the American Culinary Federation (ACF).

The ACF Chef Educator of the Year Award was established in 1998 to pay tribute to an active culinary educator whose knowledge, skills, and expertise have enhanced the image of the professional chef. Leading by example, the educator has provided guidance to students seeking a career in the culinary profession. As the ACF Southeast Region recipient, Christian is a candidate to receive the national award at the Cook. Craft. Create. ACF National Convention & Show July 30–August 3 in Orlando, Florida.

Christian’s story began after completing an A.S. in Culinary Arts/Chef Training from the California Culinary Academy in San Francisco in 1995. He worked at local restaurants to gain industry experience, with a stint in Finland to learn about cultural cuisine and live his passion. Upon his return to the United States, Christian was hired as a chef’s assistant at the enchanted Walt Disney World in Orlando, Florida.

In his daily rituals he found himself training other chefs on different station set-ups and cooking techniques. He developed a passion for training and teaching and for the past 12 years has worked as a chef instructor at Le Cordon Bleu College.

It was while working as a lead instructor that Christian realized the importance of understanding the business aspect of running a kitchen and decided to go back to school and get a business degree. With a very busy personal and professional schedule, he was happy to discover WGU through a simple online search. The flexibility that came from attending an online university made it possible for Christian to complete his school work while traveling for business. He also found WGU to be the best fit for his learning style. The competency-based learning model at WGU allowed him to breeze through science courses while course mentors helped him through courses he struggled with, such as accounting.

Christian’s faculty mentors kept him motivated while he supported his wife struggling with multiple sclerosis.

His business degree from WGU has been a tremendous asset to his career as a chef, Christian says. In fact, in a recent job interview for a lead chef instructor position, Christian said, the employer was so impressed to learn that he had a bachelor’s degree, he made a point of commenting on it to a co-worker.