Working in IT at a large vs. a small company. 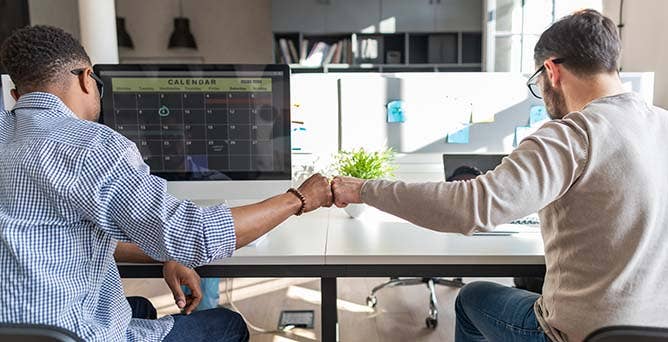 If you're still taking the first steps on your IT career path, you're faced with several choices. One of them is where you'd like to work—and whether you'd rather work for a large-scale enterprise or for a small business, such as a start-up or a mom-and-pop firm.

You might be thinking that you'd take either, so long as you're working in IT. And there's some merit to this idea. Certainly, you'll want to keep your options open as you look for a job in IT. But thinking through which scenario you'd prefer if given the opportunity won't just make your decision easier when it's time to find a job—it could also inform what type of IT degree you should earn.

Further Reading: Part-time IT jobs you can do as a side gig.

Working in IT is very different at a large corporation than it is at a small business. Each has its own benefits and challenges. Which is best for you depends on your personality, your preferences, what you're looking to get out of an IT career, and even where you are in your career arc. Here's what to consider as you weigh your options.

Where do you want to work?

Generally, the office culture and vibe at a large enterprise is remarkably different from a smaller operation's. Larger companies tend to be more complex and have more bureaucracy, but the trade off is that they often offer more structure and stability. You'll likely know what your role is and how you fit in your department from day one. Smaller companies, on the other hand, typically have fewer rules and more flexibility—but there's also more potential for gray areas.

What does this mean for someone working in IT? At a smaller company, you might need to make decisions faster, but they also might be more straightforward. If you needed to replace a router, for example, you likely wouldn't have to fill out a requisition form and get multiple people to sign off on buying it. However, some employees would prefer to follow established protocols for everything they do, instead of having to improvise new policies and procedures on the fly.

Do you want to diversify, or specify?

Employees at small firms tend to wear multiple hats, so working for a small company could introduce you to a wide variety of job functions. By contrast, you're much more likely to specialize in a particular area if you work for a large firm.

At a small company of only 10 to 15 employees, you might be the only IT person. You'd be responsible for recommending IT purchases, installing and maintaining systems, training colleagues, and providing tech support, which would give you experience with a broad range of technologies and responsibilities. In a corporation that's 5,000 employees strong, you'd probably be a cog in an entire IT division, in which each employee played a specialized role. For instance, you might program databases, set up cloud infrastructure, or maintain network security—but probably not all three.

Being a jack of all trades can make working in IT more interesting, because you get to experience more variety in the tasks you do—and you're less likely to get stuck in a rut. It also increases the potential career advances available to you, and it can pave the way to a future leadership position, because understanding many different facets of IT is a desirable quality in any potential leader. However, specializing in a single area brings its own key advantage: as you learn more within your particular niche, your expertise becomes quite valuable. You could command a higher salary as a result.

What kind of impact are you after?

Working for a large company is like steering a battleship: change happens slowly, and only after great effort. You might feel like you're just one small cog within a giant machine. As a result, it can be hard to see the impact of your work.

A small company is more nimble, and there are many more opportunities to effect change. If you created a new website that doubled your company's sales because it was easier for search engines to find, you'd feel an enormous sense of accomplishment. Those kinds of successes are more noticeable to everyone across the organization which makes it easier to stand out. But the flip side is that your failures are much more obvious, too.

What it all means.

When you're just starting your career, working for a small company can be an efficient way to learn many skills and build a strong professional reputation, which you can parlay into any IT career path you'd like. On the other hand, if you know right away that you want to specialize in a certain IT role, working at a large firm could offer the potential for faster career advancement—and probably a more generous benefits package, too.

If you think you'd be happier working for a small company, earning a general IT degree, such as a bachelor's in computer science or information technology, would give you a solid foundation for success by introducing you to a broad range of IT skills. If you'd rather work at a large corporation, consider earning a more specialized IT degree, such as a bachelor's in data management, network operations and security, or cloud and systems administration.

Whatever path you choose, an exciting career in IT awaits.

Leadership positions available in IT.

The requirement for tech operations daily has risen and many IT businesses are looking to stock up on executives.

Aligning your skill set with these roles will push you ahead of the competition on a richly rewarding tech-career.

3 questions about online IT degree programs.

Get three important questions answered about getting an online IT degree.