Registered nurses are essential caretakers for those in hospitals. They work directly with doctors and physicians to manage patients, administer medications, and schedule procedures and operations.

Nurses are caring individuals with a passion for the healthcare industry. Although historically nurses could enter the field with less education, modern clinical standards are increasingly requiring a bachelor of science in nursing (BSN) at minimum. 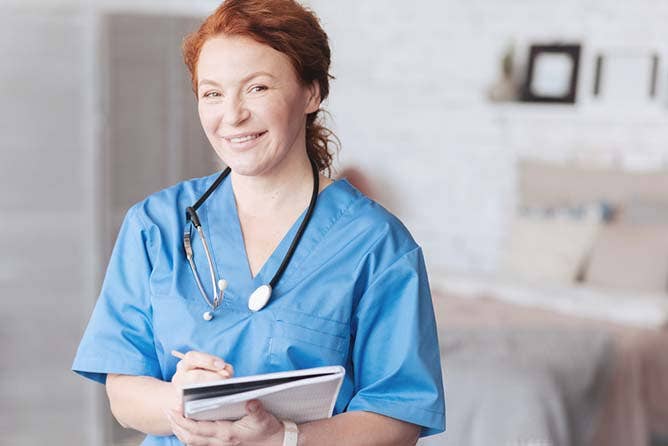 Registered nurses carry the healthcare system. They work directly under the direction of lead doctors and enable doctors to care for more patients.

A registered nurse (also called RN) is an individual who has a nursing diploma and has passed the NCLEX-RN exam administered by the National Council of State Boards of Nursing (NCSBN). They undergo intense education to ensure they understand the best health practices and know the best care for their patients.

According to the American Association of Colleges of Nursing (AACN), there are over 3.8 million RNs in the United States. Nearly 58% of RNs work in general medicine and surgical hospitals. They also work in private practices, clinics, military hospitals, and healthcare research.

The AACN also reports that there are nearly three times as many RNs than physicians in the United States. Because there are three nurses per doctor, nurses perform a majority of services within healthcare.

The daily responsibilities of a nurse will change, depending on their industry. A trauma nurse or critical care nurse working in the ER will provide emergency care and manage pain. For comparison, a pediatric nurse is trained to work directly with children to make them feel more comfortable in a potentially stressful setting.

Some of the most common nursing fields include:

Registered nurses are vital to the healthcare industry. They provide essential services to patients across a wide variety of fields.

Registered nurses have three education options: a nursing diploma, an Associate Degree in Nursing (ADN), or a Bachelor of Science in Nursing (BSN). Nurses who choose to get a diploma or associate degree will be qualified to become RNs after taking the NCLEX exam, however, nurses with a diploma or associate degree are less competitive candidates than those who choose to graduate from a bachelor’s program. It is increasingly common for hospitals and other employers to state “BSN preferred” on job postings, or even to require diploma or ADN nurses to earn their BSN within a certain amount of time after being hired. Nationally, there is a growing shift to make the BSN degree the standard for RNs, and many states and employers are moving toward adopting this, making it important for prospective nurses to consider attaining their BSN as part of their journey to nurse certification.

After earning your diploma or degree, there are additional steps to becoming a licensed nurse. Different states will have unique requirements for registered nurses, so it’s important to research the requirements in your state. In general, however, nurses must meet the following requirements:

Nurses should also check with their state board to ensure that they are receiving the proper certifications and licenses to practice in their state.

A one-of-a-kind nursing program that prepares you to be an RN...

A one-of-a-kind nursing program that prepares you...

A one-of-a-kind nursing program that prepares you to be an RN and a baccalaureate-prepared nurse:

WGU offers the prelicensure program in areas where we have partnerships with healthcare employers to provide practice sites and clinical coaches to help teach you and inspire you on your path to becoming a nurse.

If you don't live in one of our prelicensure states or don't qualify to apply, consider getting our Bachelor's Degree in Health Services Coordination instead. This degree allows you to work inside the healthcare industry, while also working directly with patients who need help.

With over 35,000 BSN alumni, this is one of WGU's most popular online degree programs. View our RN to BSN degree guide.

If you don't currently have an RN and don't qualify for your nursing prelicensure program, consider getting our Bachelor's Degree in Health Services Coordination instead. This degree allows you to work inside the healthcare industry in a unique way. 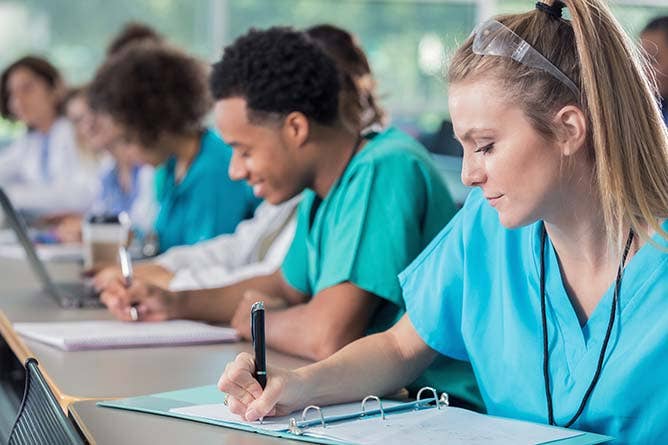 Registered nurses are hardworking, dedicated individuals. Many have on-call positions and work extended shifts to meet the needs of their hospitals. RNs needs to have the following skills if they want to excel in their positions:

Registered nurses should also possess critical thinking skills and be responsible in their care and precision.

How Much Does a Registered Nurse Make?

According to the U.S. Bureau of Labor Statistics (BLS), registered nurses have an average of $75,330 per year, or $36.22 per hour. Yearly wages vary depending on location, field, and years of experience. Nurses often work nights, weekends, and holidays to cover the demand when working in hospitals and other high-demand facilities.

What Is the Projected Job Growth?

Nurses are always in high demand. As the U.S. population continues to age, there will be more health conditions related to age, such as arthritis, dementia, diabetes, and obesity.

Where Do Registered Nurses Work?

There are many locations for registered nurses to find long-term positions. No matter which field nurses decide to work in, they always provide essential and life-saving care.

Learn more about degree programs that can prepare you for this meaningful career.