An important part of many modern criminal investigations, a forensic computer analyst collects and analyzes relevant data from digital devices. Analysts work in tandem with law enforcement officers to obtain useful data from devices used by suspects, victims, or other parties of interest.

If you’re someone interested in both criminology and computer science, ready to put your digital skills to work keeping your area safe, a career as a forensic computer analyst could be perfect for you. 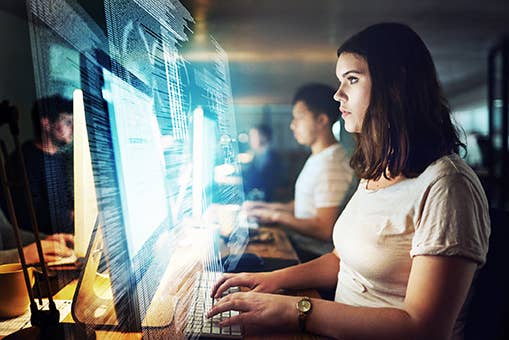 Whether it’s a mobile phone or a computer system, devices can store information useful in solving modern crimes. Forensic computer analysts examine this information, including any relevant images, text messages, emails, documents, and any other data law enforcement officers might find useful in furthering a criminal investigation.

If you’re aspiring to become a forensic computer analyst, you will most likely need to obtain a relevant undergraduate degree. You will also benefit from any years of experience spent working in the field of criminal justice.

The exact responsibilities of a forensic computer analyst can often include:

Certifications you might need as a forensic computer analyst can include:

Before you can fulfill a role as a forensic computer analyst, you will need to complete a few educational requirements. A bachelor’s degree in cybersecurity and information assurance is an ideal place to start. This type of degree will give you important skills and experience working with network security, software systems, programming languages, and computer forensics. It will be vital to understand how IT works along with the data privacy and network security that will be crucial in preparing for this type of career. Additionally you may need some experience in the field to move into a computer forensic position, so internships and entry-level positions can be key to preparing you to move up in your career.

Protect your career and earning potential with this degree....

Protect your career and earning potential with...

Protect your career and earning potential with this degree.

Some careers and jobs this degree will prepare you for:

Certifications included in this program at no extra cost include:

Become the authority on keeping infrastructures and information...

Become the authority on keeping infrastructures...

Become the authority on keeping infrastructures and information safe.

The curriculum is closely aligned with the National Initiative for Cybersecurity Education (NICE) Workforce Framework, plus includes the opportunity to earn these certifications:

This program was designed in collaboration with national intelligence organizations and IT industry leaders, ensuring you'll learn emerging technologies and best practices in security governance.

The exact skills a forensic computer analyst needs could include:

These and other skills make forensic computer analysts indispensable to many law enforcement divisions.

How Much Does a Forensic Computer Analyst Make?

The exact income of a forensic computer analyst can vary, depending on several factors. These can include their employer, employer’s location, employer’s public or private funding, years of experience, and active certifications.

What is the Projected Job Growth?

Total employment of information security analysts is expected to grow 31% from 2019 to 2029. This steep forecasted growth rate is well above the average for all occupations, and represents a favorable job outlook in future years.

Where Do Forensic Computer Analysts Work?

Forensic computer analysts might work in locations that include:

Learn more about degree programs that can prepare you for this lucrative career.