WGU Named One of 50 Most Innovative Companies

The Most Innovative Companies is Fast Company’s most significant, high-profile editorial effort of the year. The editorial team spends months gathering and sifting data to identify those enterprises that exemplify the best in business from across the economy and around the world. The end result is a package that dares to be different, emphasizing not just revenue growth and profit margins but also progressive business models and an ethos of creativity. 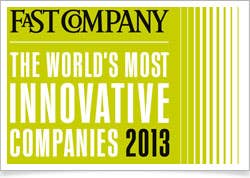 In ranking WGU, Fast Company notes that WGU leads the nation in master’s degrees in math education and offers high-quality, accredited, affordable bachelor’s and master’s programs in teaching, health professions (including nursing), IT, and business. It highlights the fact that WGU’s programs are developed with input from leading employers throughout the industry. And it emphasizes the ways WGU uses innovative technologies to improve learning while keeping tuition low.

“And while public university tuition was rising by about 5% a year, WGU's has held steady at $6,000 since 2008,” the Fast Company article reads.

Fast Company’s Most Innovative Companies issue (March 2013) is on newsstands beginning February 19 and available online at www.fastcompany.com as well as in app form via iTunes.

WGU was founded by 19 U.S. governors in 1997 to provide a new, technology-driven way for working adults to have access to a quality higher education. Today, its currently enrolled student body has grown to nearly 40,000, and in January 2013 the university awarded its 20,000th degree. WGU is especially designed for busy working adults who need a bachelor’s or master’s degree to advance their careers. The average age of WGU’s students is 37, and 68% of the student body works full time.

Fast Company is the world's leading progressive business-media brand, with a unique editorial focus on innovation in technology, ethonomics (ethical economics), leadership, and design. In print and through digital and social channels, as well as live events, Fast Company reports on and addresses the most progressive business leaders. Editor Robert Safian was named AdWeek's Editor of the Year in 2009. Under the leadership of publisher Christine Osekoski, Fast Company made AdWeek’s Hot List for three consecutive years, and FastCompany.com executive editor Noah Robischon has tripled traffic and revenue. Fast Company is owned by Joe Mansueto, founder, chairman, and CEO of Morningstar, a leading provider of independent investment research.