WASHINGTON, D.C. — Gallup has released the results of a new study that compares the satisfaction and overall well-being of Western Governors University (WGU) graduates with graduates from other institutions in the U.S. According to the study, WGU graduates are reporting significantly higher levels of overall well-being and career success than the national average. In the report, WGU graduates credit their student experience, relevant curriculum, and individualized faculty support as key contributors.

Details of the findings were reviewed Tuesday at Gallup headquarters in Washington, D.C., by a panel led by Gallup’s Brandon Busteed. Panel members included author and Washington Post columnist Jeff Selingo, The Chronicle of Higher Education senior writer Goldie Blumenstyk, and WGU President Scott Pulsipher. A recording of the event is available here.

The survey, which included 2,452 WGU graduates, compared the WGU responses to the national data included in the Gallup-Purdue Index. The study examined WGU alumni outcomes based on Gallup’s measures of workforce and life outcomes — including employee engagement, well-being, and emotional attachment to the university. The study provides insight into these outcomes and the graduates’ reflections on their undergraduate experiences. 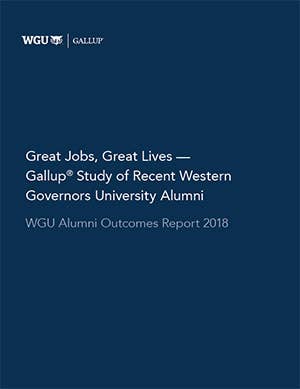 According to the study:

"Gallup has been tracking WGU graduates for four years, and every year, we see data that reinforces WGU is providing its students with the personalized faculty support and high-quality degree programs that are leading to important long-term outcomes for graduates,” said Gallup’s Brandon Busteed.

Nonprofit and fully online, WGU offers more than 60 bachelor’s and master’s degree programs in business, K-12 teacher education, information technology, and health professions, including nursing. WGU’s learning model, competency-based education, is ideal for busy adults, allowing them to study and learn on a schedule that fits their lives. Students work through course materials with consistent, one-on-one faculty support, advancing as soon as they demonstrate, through assessments, that they have mastered the subject matter. Because they are not tied to traditional semesters and course schedules, many students are able to accelerate and finish their degrees faster—the average time to a bachelor’s degree at WGU is less than three years.

Gallup delivers analytics and advice to help leaders and organizations solve their most pressing problems. Combining more than 80 years of experience with its global reach, Gallup knows more about the attitudes and behaviors of employees, customers, students and citizens than any other organization in the world.