Higher Ed Survey: What Tennesseans Think Is Most Important for Next Governor

NASHVILLE — Four hundred and six people responded to an online poll conducted by WGU Tennessee that coincided with 2018’s first statewide gubernatorial forum, which focused on education. When asked “Which higher-education issue will be the most important for the next governor’s administration to address?” 69 percent chose “college affordability and student debt reduction” as their top answer. 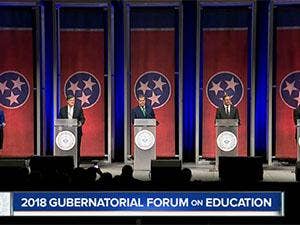 “The results illustrate how important it is for the next governor to build on the higher-education initiatives implemented by Governor Haslam’s administration,” said Kimberly Estep, Ph.D., chancellor of WGU Tennessee. “The bar has been set very high, and Tennesseans clearly feel that it’s important for the next administration to keep focusing on policies aimed at affordability and responsible borrowing in order to meet our educational and workforce development goals.”

Also selected as important issues for the next governor were “building a better-educated workforce” at 16 percent and “increasing access to higher education for rural Tennesseans” at 9 percent. Respondents who listed “other” — almost 5 percent — were asked to specify an issue. The most common response by those participants focused on increasing and improving technical training opportunities for Tennesseans.

The survey also asked, “Which of the following K–12 education issues will be most important for the next governor’s administration to address in order to better prepare students for college?” Respondents chose the following issues: “increased and/or improved STEM programs” at 44 percent, “increased early-intervention programs for at-risk students” at 37 percent, and “more charter school options” at 5 percent. Among those choosing “other” — 13 percent, concerns around standardized testing were cited most frequently.

WGU Tennessee is a nonprofit, online university launched in 2013 to serve adult learners as part of Tennessee’s Drive to 55 initiative, which seeks to equip 55 percent of Tennesseans with postsecondary degrees by 2025. In order to meet that goal, many of the estimated 900,000 Tennesseans with some college experience, but no degree, must return to school to earn degrees.

Many Tennesseans — adult learners and traditional students — are eager to learn more about the gubernatorial candidates’ education policy ideas in the coming weeks and months. When asked “What question do you most want the gubernatorial candidates to answer at the forum on education?” the replies varied; but respondents largely want to know where the candidates stand on three issues: positions on K–12 school choice (i.e., vouchers and charter schools), ideas for improving literacy, and how to develop better testing and evaluations for students and teachers.

The statewide gubernatorial forum on education from Jan. 23 can be viewed at https://www.tennessean.com/videos/news/politics/2018/01/23/gubernatorial-forum-education-full-event/109753568/.

The survey was posted online for several hours before the forum and received 406 responses.