Chittum is a military veteran and father of two who works in TWC’s Career Schools and Colleges Department. He recently finished his associate’s degree with a 3.93 GPA and has committed to finishing his bachelor’s in business administration through WGU Texas in 12 months, which the university’s unique learning model makes possible. 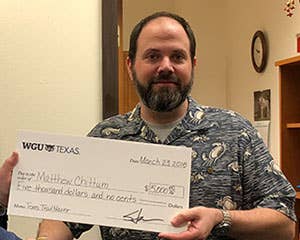 “Our competency-based learning model allows students to use their knowledge and life experiences to accelerate through course work they’re familiar with, so they have more time to focus on what they still need to learn,” said WGU Texas Chancellor Dr. Steven Johnson. “WGU Texas is ideal for students like Matthew who want a thorough education in an efficient, cost-effective manner, and we’re looking forward to seeing him graduate and further succeed in his career.”

The online, nonprofit university established by 19 U.S. governors has grown to become one of the nation’s largest universities, offering competency-based bachelor’s and master’s degree programs in business, K-12 education, information technology, and health professions, including nursing. Since its inception, WGU Texas has been helping to increase the number of college graduates across the Lone Star State.

“Getting the scholarship allows me to complete my degree with much less student debt than I originally planned on. Tuition was really affordable to begin with, but this scholarship makes a big difference to me,” Chittum said. After he completes his bachelor’s in business administration, he wants to continue his education to earn his MBA and possibly a master’s in public administration.

In 2017, WGU Texas awarded degrees to 1,995 students from 129 counties across the Lone Star State. Since the university’s launch in Texas in 2011, more than 8,100 graduates have earned their undergraduate or graduate degrees through a variety of academic offerings, helping to address the state’s critical workforce needs in high-demand fields such as IT, healthcare, business, and education, and WGU Texas recently reached another milestone: a total student enrollment of 10,000. Also of note, later this year, WGU Texas expects to award its 10,000th degree.