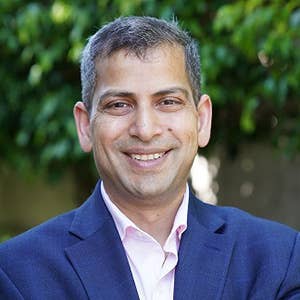 SALT LAKE CITY — Western Governors University (WGU) is pleased to welcome Nadeem Syed as Chief Financial Officer. He succeeds David Grow, who’s led financial strategy for 14 years, introduced WGU’s innovative flat-rate tuition model, and has since moved into the role of Chief Operating Officer. Syed will lead all aspects of financial strategy and operations at the nonprofit university, with a focus on maximizing WGU’s students’ and graduates’ return on educational investment while maintaining the university’s ability to self-sustain on affordable tuition.

"At WGU, we believe that education is the surest path to opportunity, and we hold ourselves accountable as a good fiduciary to our students,” said WGU President Scott Pulsipher. “Nadeem’s passion for lifelong learning, expansive financial knowledge, and entrepreneurial mindset aligns with the student-centric mentality that drives WGU’s culture. We are thrilled to have him join us, and we look forward to his impact.”

WGU is a pioneer in competency-based education and an early adopter of technology-enabled teaching and learning. In its first 24 years, WGU’s disruptive educational model has helped more than 230,000 individuals earn bachelor’s and master’s degrees at a cost that has remained at half the national average. Keeping in the tradition of learners first, Syed will work closely with WGU’s Chief Academic Officer Marni Baker Stein and Chief Information Officer David Morales to execute on innovation and evolution of WGU’s learning platform and technology—creating personalized learning pathways that follow our values of high quality and affordability, delivering high value to WGU students.

“As the original digital-native university, WGU embodies innovation and student obsession,” Syed said. “The mission of creating pathways to opportunity for underserved student communities resonates with my sense of purpose and my own experiences with the transformative power of higher education. I am delighted to join the talented leadership team to expand student access, accelerate innovation, and help WGU maintain its leadership in reimagining higher ed for the next century.”

Syed joins WGU following 11 years with AT&T, most recently as its head of consumer wireline finance. Prior to that, Syed led the product, corporate development, and strategy finance for Xandr - AT&T’s advertising company. During his tenure at AT&T, Syed held diverse leadership positions across finance, pricing, analytics, and business development. His roles spanned telecom, media, and advertising sectors. Syed was a founding member of AT&T Partner Exchange—a startup business within the company—and was instrumental in the launch of DirecTV Now streaming service. Prior to AT&T, Syed co-founded a medical imaging start-up in Singapore, led software R&D at Hewlett-Packard, and conducted machine learning research, publishing several peer-reviewed articles. Syed grew up in India and obtained a B.S. in Computer Science from National University of Singapore as a recipient of Singapore Airlines Scholarship from the Government of Singapore. He later earned an M.S. in Computer Science and an MBA, both from Georgia Tech.