Changing roles of IT programmers and developers. 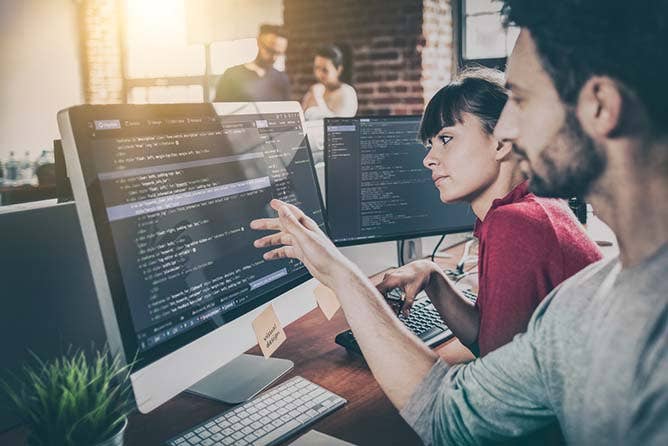 So what is it, exactly, that IT programmers do? What about software developers? Is there even a difference between the two?

Because the field of IT is constantly evolving, understanding what separates these jobs can be challenging. The roles and responsibilities within IT departments look much different today than they did just 10 years ago.

If you're interested in a career in IT programming, software development, or computer programming, it's important to know exactly what you're getting yourself into. Here's a look at what these roles involve, how they've evolved over time, and how to determine which one is right for you.

Pubali Banerjee, program chair for software development in the College of Information Technology at Western Governors University, realizes the roles of all three can be a bit confusing.

"These terms are not always distinct and are subject to interpretation," Banerjee said. "I think of a computer programmer as someone who writes code and is an expert in one or more programming languages. A computer programmer has a deep understanding of computer algorithms and data structures."

"A [software] developer writes code but is also involved in other stages of the software lifecycle, including research, design, installation, and testing," Banerjee noted. "If we wanted to distinguish between an IT programmer and a computer or software programmer, we could always say that an IT programmer might be involved in systems-level programming."

Despite their differences, programmers and developers play vital roles in the construction and maintenance of an organization's digital ecosystem.

How to enter the field.

A good way to understand what programmers and developers do is to look at the courses and degrees required to enter the IT field.

A computer programmer will almost always hold a bachelor's degree, according to Banerjee.

"Typically, a programmer will have a computer science, computer engineering, or IT degree with an emphasis in programming or software development," she said. "A programmer first and foremost needs to be able to think logically. So reasoning and math skills are the building blocks, and programming- and language-specific skills are built on top of those fundamental skills."

The courses that go along with a computer science degree can vary, but you're most certainly looking at classes in coding, programming languages, algorithms, artificial intelligence, data management, and operating systems. To prepare for this load, it wouldn't be a bad idea for a student to take similar classes in high school, if they are offered.

The ever-evolving role of the programmer.

We all imagine a computer programmer sitting behind a computer screen writing codes full of zeros and ones. But that's not all they do.

"For the computer programmer role, I have seen a lot of changes in the programming languages used, from mainframe and Cobol, to programming languages with GUI interfaces like Visual Basic and Visual C, then Java, C#, and dot-net technologies, and more recently agile development and mobile apps," Banerjee said. "The role of the software developer continues to change, also. Developers are often required to do a lot of testing and deployment work on top of developing applications. We have individual mobile app developers now, which is a new role altogether. But AI will most definitely have a strong influence on this field, and we will see some automation. This, in turn, will force the role of the software developer to change, and versatility and flexibility will be required."

Today's programmers are often responsible for analyzing their specific clients' business needs and brainstorming technical solutions to address those needs. Developing those solutions can involve designing and testing software, writing code, and debugging; during this time, the computer programmer stays in constant contact with the executives of the company to plan and collaborate for the future.

The roles and responsibilities of IT programmers and software developers aren't the only things evolving.

"In the last two decades, we have seen a tremendous boom in the IT job market," Banerjee said. "The projected job growth in software over the next decade is about 20 percent, which is much higher than the average projected job growth. The number of graduates produced in this field is far less than open positions, which is good news for our students."

The Bureau of Labor Statistics estimates that the software development field will grow by more than 302,000 jobs by 2026—a 24 percent increase over current numbers. For soon-to-be-graduates, those are incredibly promising stats.

If you're ready and raring to enter into the realm of computer programming, start developing your skills now to prepare yourself for the experience. With the programmer and developer roles constantly changing, it would be best to have a variety of skills in your repertoire.

"When looking for a job, the more coding experience a student has, the better," Banerjee said. "I would advise students to grab opportunities to work on software projects whenever they can and that includes voluntary opportunities and class projects."