You’re creative, analytical, and a natural problem-solver. That’s why you love software development. Earn the degree and certifications that can advance your career. Build a career in software and app development. 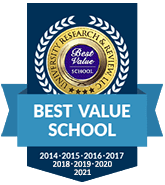 View other WGU degree programs similar to this one.