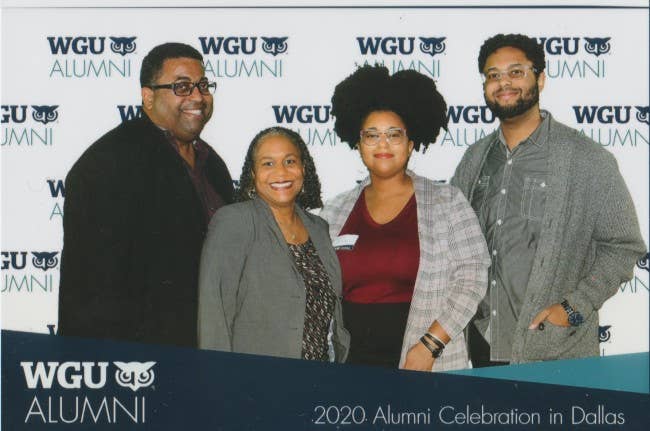 4 family members. 7 degrees. 1 university. The Williams family is the perfect example of how Western Governors University can not only change the life of a person, but of an entire family.

Kwesi and Tania and their two children Kaleb and Kharon all attended WGU, earning a total of seven degrees between them all. Their connected educational journeys are an inspiration for other families wondering if WGU can work for them. Education is proven to help individuals benefit society at large, and a degree can have a dramatic impact on individuals and families in ways you may not expect.

“I wanted my children to do as I did and not just what I said.”

Kwesi and Tania have always focused on helping their children succeed. They opted to homeschool Kaleb and Kharon, empowering them to earn an associate degree and high school diploma at the same time.

Kwesi and Tania had a plan for their children to continue to get their bachelor’s degree, and then a master’s degree. They wanted them to be as successful as possible, and they knew higher education was key to helping them stand out for jobs. According to a Careerbuilder survey, 38 percent of employers said they had raised education requirements in the past five years, most of them citing increased job complexity as the primary driver of the trend.

Many employees may already have these qualities, but completing a college degree demonstrates something more to employers. According to Career Profiles,

“. . . people who have completed a college degree of some kind tend to have stronger analytical thinking skills than those who haven't. Furthermore, completing a college degree demonstrates something very important: that you have the persistence and dedication necessary to finish what you start. These two factors alone—apart from the specific skills you acquire throughout college—are enough for most employers to choose the college graduate any day of the week.”

“At first, my son doubted he could do it,” Kwesi said. “I knew he could and I knew if he did, his younger sister would follow in his footsteps. Then it dawned on me, whose footsteps was he going to follow?”

You see, neither Kwesi nor Tania had graduated with an accredited higher education degree. Tania had dropped out of college when she had a high-risk pregnancy, and Kwesi had gotten an online degree, but later learned it was from a non-accredited institution, making it less valuable.

So Kwesi decided to take his own advice, and started attending community college to earn his associate degree. But he felt a bit frustrated with the timing of class offerings conflicting with his work and how slowly the classes went over material.

After getting his associate degree, he was ready to move on to his bachelor’s degree. But Kwesi knew he wanted a different experience from his associate degree. He wanted an online, accredited option that gave him the flexibility he needed to balance his work and schooling.

“After many hours of research, I found it. It did exist! A university designed with me in mind,” he laughed. “When I found WGU, it was too good to be true. A university that was accredited, recognized, and respected with flat-rate tuition, six-month staggered semesters, and the ability to achieve my goal at the pace my life allowed. It was the opportunity I needed to accomplish my dream of leading my family’s legacy of learning.” 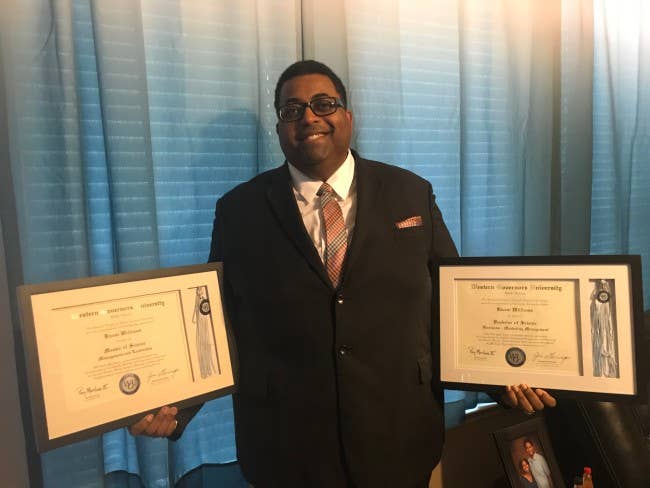 And just like that, Kwesi was off like a rocket. He went through his courses quickly, taking advantage of competency-based education that allowed him to move through his courses as soon as he mastered the material, instead of waiting for a term or semester to end.

Kwesi graduated with his Bachelor of Science degree in Business Management in May of 2014, and his Master of Science in Management & Leadership degree in November of 2014. He even went back and earned another master’s degree, an MBA, in 2019.

It was extremely valuable for Kwesi to earn his degree to help his family follow his example. According to the U.S. Education Department's National Center for Education Statistics, 45 percent of kids who enrolled in school came from households where at least one parent had a degree. By contrast, just 26 percent of students came from households where neither parent had a degree.

Kwesi had set something in motion that would impact the rest of his family, and change all of their lives. 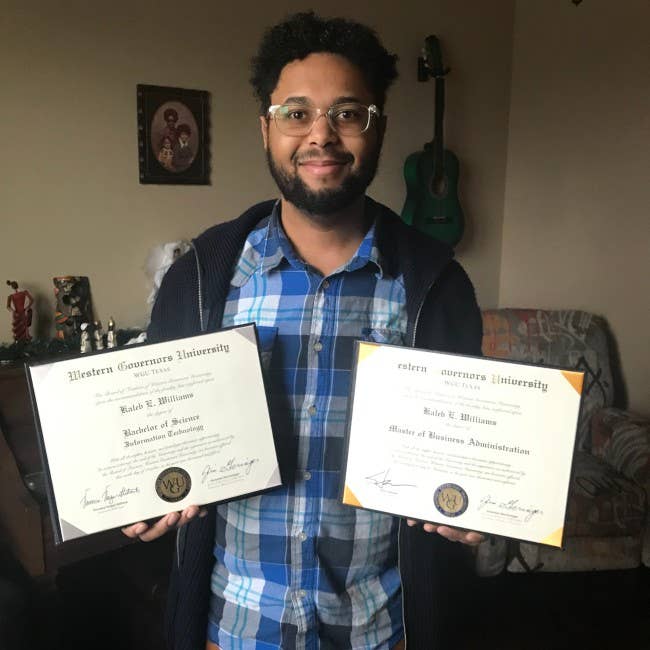 Kaleb was the next Williams family member to attend WGU. He watched his father excel and move quickly through his classes, and knew he could do the same.

“After being homeschooled and doing most of my college classes online, the ‘at your own pace’ style of WGU was exactly what I was looking for,” he said. “Being able to speed up when I felt I had comprehension of a subject, and slow down when I needed more time allowed me to finish classes when I had mastered competencies completely.”

He earned his Bachelor of Science in Information Technology, followed by an MBA. Kaleb is currently using his degree in his work as a campus technician for Irving Independent School District, and is in the process of becoming a business information management systems teacher.

“Anybody would struggle to find an accredited school that offered the range of programs and flexibility that WGU offers, not to mention the price,” he said with a laugh. 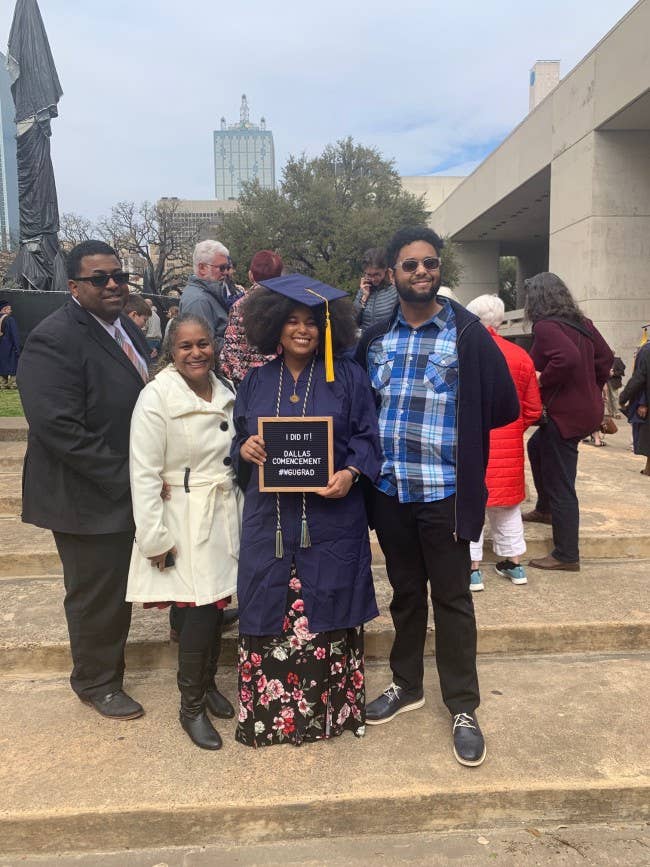 “Hearing about how my brother and father were able to see their hard work pay off so obviously really inspired me,” Kharon said. She was the third member of her family to pursue a degree from WGU. She received her Bachelor of Science degree in Business Management, and is working in the court system.

“My degree has allowed me to qualify for promotions and also allowed me access to opportunities that were previously out of reach,” she said.

While pursuing her degree, Kharon found that however she wanted to learn, WGU had options to help her.

“WGU makes it possible by offering multiple styles of learning that has something for everyone,” she said.

“Every WGU course I attended offered recorded videos, readings, one-on-one meetings with course instructors, and live cohorts with instructors. No matter what learning style you have, you'll find something at WGU that works for you. Pair that with the wide range of degrees WGU offers and there really is something for everyone.” 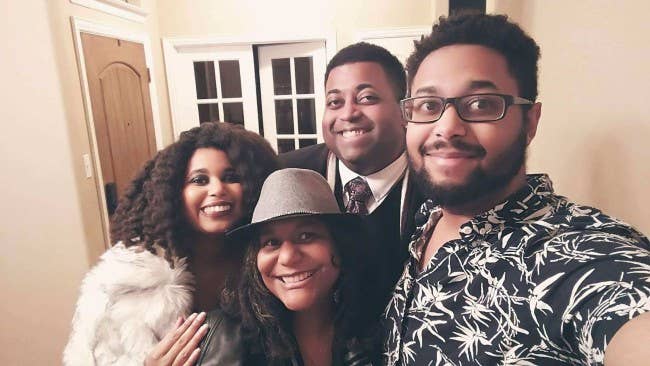 “I certainly couldn't expect great things from them and not follow suit myself.”

Tania watched her husband and her two children go to school and pursue higher education. She herself had tried to go back to college twice, but it had always seemed like a never-ending road that she just couldn’t finish. But there was something about WGU that was different.

“The quality of the education is top-tier,” she asserted. “This is not a degree mill. The Department of Education was right when they highlighted the exceptional performance of WGU as an online university.”

Tania began her Bachelor of Science in Information Technology Management program, graduating in June 2020. Like her family members, she found that her life didn’t have to be put on hold for her schooling.

Tania’s work at the Internal Revenue Service keeps her extremely busy, but with a family that places such a great value on higher education, she knew a degree was something she wanted.

“I have worked hard and climbed the career ladder higher than I ever anticipated, but it always bothered me that I hadn't finished the degree that I started right after high school,” she admitted. “Finishing this degree is a milestone that I've needed to accomplish for my own sense of peace for years.”

The Williams family is just one example of how WGU can change the lives of individuals and families alike. Multiple degrees, better job opportunities, higher salary levels, and a sense of confidence all impact an individual and a family. WGU is in the business of changing lives, and you and your family could be next.

According to a white paper by the Lumina Foundation, college graduates are far more likely to volunteer, contribute to charities, vote/engage in politics, and regularly participate in school, community, civic, and religious organizations. This is what most parents would want for their children—to be educated and involved in their community.

“Any motivated student can make WGU work with his or her lifestyle,” Tania said. “Anyone who is serious about getting a quality education and actually finishing their degree without paying for it forever will benefit from choosing WGU.”

Discover the theories behind adult learning and how they can help you in your higher education.

How to transfer colleges to WGU.

Learn how to transfer to WGU, whether you've had community college or traditional college credits.

A recording of a webinar that answers the top 10 questions prospective students have about WGU’s College of IT.