Going back to college when you have school debt. 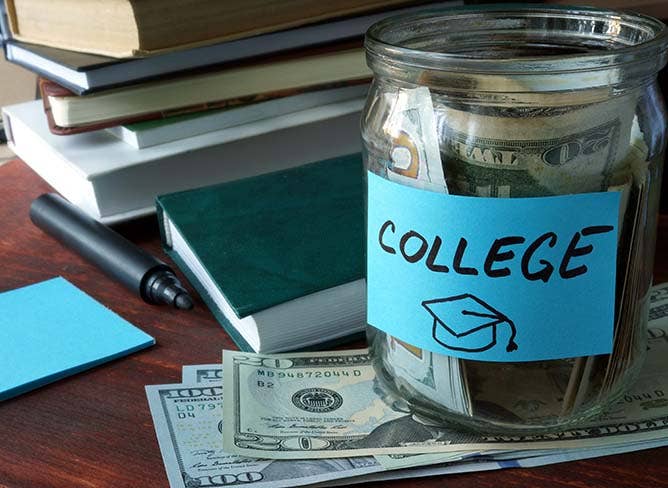 So you're thinking about going back to college. There's just one problem: You're still paying off your first go-round. Should you wait until you pay off your school debt in full before you go back? Or is it a better idea to go back to school even if you're carrying some school debt?

If you still have student loan debt, you're not alone. According to the latest report from the Federal Reserve, 22 percent of American adults carried some outstanding school loan debt in 2017. The total U.S. student loan debt hit $1.56 trillion in 2020, and more than 10 percent of it is in arrears, according to Bloomberg, meaning that the borrowers have been unable to pay it back on time—or at all.

At least some of this problem can be attributed to lending practices that encouraged students to take out the maximum amount they qualified for. WGU has studied this issue in depth and has even created the Responsible Borrowing Initiative to help students make smarter choices when it comes to loans and other forms of financial aid as they look to complete their degrees.

So, what does all of this mean for you?

If you're hoping to go back to school, the first thing you'll need to do is take a long, hard look at your debt. Start by asking yourself some questions:

If your loans aren't in good standing, you won't be able to apply for new ones to pay for any new education. If you're in arrears, your next step should be getting yourself on a payment plan with your lender.

If you've been paying off your loans regularly, you should still talk to your lender about your plans to go back to school. They might be able to offer you options that will help you apply for more money so you can go back to school.

If your loans are in good standing, that's great news! You can go back to school. Still, you should take stock of how much you owe. If you have a lot of debt, consider paying some of it down before you head back to school—too much existing debt could mean higher interest rates on a new loan. You also might not qualify for some federally subsidized loans.

Federally guaranteed loans are important because the government is more forgiving than private lenders and often issues lower interest rates, according to the U.S. Department of Education. For example, subsidized loans don't accrue interest while you're in school or during deferment periods, Investopedia says, but private loans might start accruing interest immediately.

In some cases, going back to school even when it means taking on more debt is a wise move. Perhaps you've maxed out what you can earn in your field and you want to move into one that pays better. Or maybe you're going into a career, like medicine or law, that requires you to get an advanced degree right after your undergraduate degree.

In that case, you might have no choice but to take on student debt immediately. But the good news is that if you're starting post-graduate studies right after you get your bachelor's and you're going more than half-time, you can request a deferment, according to Sallie Mae—you can suspend your payments, though you'll still accrue interest.

If the reward is a high-paying job, though, it could make taking on greater student debt a risk worth the while, as you might be able to pay off your loans more quickly once you've graduated and landed a job.

A word of caution.

When it comes to taking on more student debt and going back to school, always consider your current financial situation first.

Going back to school might mean a brief respite from student loan payments, but you could default after you get out of school. That's something you want to avoid—once you default on a student loan, the entire balance becomes due, your credit score suffers, and you'll be hounded by collection agents.

If you're struggling financially and just barely paying back your existing loans, you might want to wait until you're on sound financial footing before taking on more debt—especially if there's no certainty that additional education will lead to a better job.

If you're guaranteed a pay raise or a higher-paying job after you graduate, though, and that job will help you pay off your debt more quickly, you could decide to take on that debt anyhow and head back to school.

How to pay for college during times of uncertainty.

The key takeaway during Financial Literacy Month 2020 is to get to know your available resources.

5 signs it's time to improve your skill set.

Learning new skills isn't just a way to stay relevant in your career. It's also a way to unlock new opportunities.

Discover which degrees can help you get a more recession proof job and further your career.