Ten-hour shifts and a master's degree.

Sarah Talarico is managing her 10-shifts and earning her nursing master's degree, all in the midst of a pandemic. 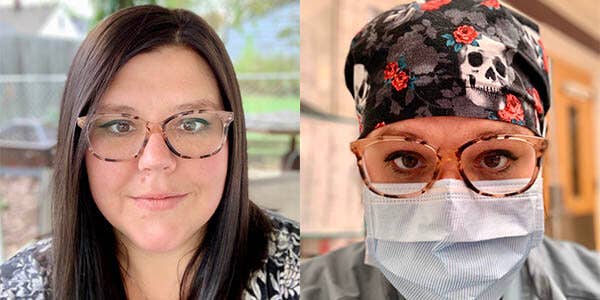 Sarah Talarico believes she would not have been able to reach her career goals if not for Western Governors University.

She had long wanted to obtain a bachelor’s degree in nursing but it was delayed for several reasons and many years until she learned she could receive it online at her own pace at WGU.

“I loved the setup at WGU,” she said. “I was not able to fit in a traditional educational path.”

The advantages of WGU, which currently serves more than 3,700 Ohio residents, include allowing students to earn their degrees by demonstrating what they know and can do (competencies) instead of sitting in classes. They move through courses at their own speed and pay a flat-rate tuition for each six-month session.

Talarico, an operating room nurse at a large hospital system in Cleveland, received her bachelor’s degree in April 2019 and decided to enroll in WGU’s master of science nursing program with a focus on leadership and management.

“I looked at many different programs and when I spoke with an enrollment counselor at WGU I realized the competency-based set up made sense to me,” she said. “I had been in the medical field for many, many years and my knowledge base has helped me get through certain classes more quickly than if I was in a brick and mortar school with semesters.”

She is also glad she can take courses on her own time because her schedule of four, 10-hour shifts a week is so unpredictable.

“Pre-Covid I was able to move ahead in the school work,” she said. She signed up for her third six-month term in January but her progress slowed when she had to deal with Covid-related work and home issues.

“I was progressing at a rapid pace prior to the world changing,” she said. “I try to do one school-related thing a day. Even if work 10 hours I can use the app on my phone to look at course materials.”

She said she is receiving a lot of support from her mentors at WGU.

“When Covid began I was in the middle of a class and the middle of a paper,” she said. "I got messages from my course mentor and program mentor asking if I was OK. They told me to take my time and they believed in me. They support me which is something I did not get at previous schools.”

Her future aspirations are focused on the field of nursing.

“I want to change how we treat each other as nurses and why we all decided to choose the profession of nursing,” she said. “I want to bring that back into the mix more and focus on building each other up. The health care field is difficult enough and you need a good support system.”