Reaching beyond the four walls of a classroom. 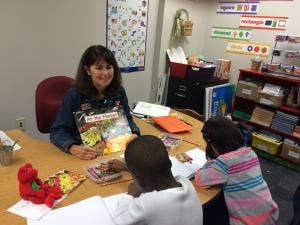 Outside of the home, children spend the majority of their time learning and discovering the world within four walls of a classroom. Teachers have the opportunity and privilege to spark intellect and dreams in the minds of our nation’s future leaders—potentially setting them on a path for life and career success.

Diane Schroeder strives to be that teacher—inside and outside of the classroom.

Growing up in a family of educators, Diane was convinced she would do something different, but teaching always felt important and purposeful.

She earned a bachelor’s degree from the University of Oklahoma in 1988, earned her Oklahoma teaching license, and went on to teach the second grade for 16 years. The job was rewarding, but when her daughter entered middle school, she chose to take a break from work in order to be the “band mom” and the “PTA mom.” Caring for her daughter took up most of her time, but she didn’t want to put her career to rest entirely. She realized she wanted to go a different direction with teaching and chose to work part time as a literacy tutor at a local school.

Recognizing that there is not a one-size-fits-all method to teaching, Diane decided a full-time teaching position working with English language-learning (ELL) students was the path she wanted to take.

After four successful years of working with elementary-school ELL students, Diane knew she had so much more to learn in order to provide her students with the best education possible. A fellow teacher had earned a master’s degree and recommended she do the same.  Diane enrolled with WGU after discovering she could complete her degree quickly and affordably, and she hit the ground running.

She says a master’s degree has given her confidence in her knowledge and abilities. Without a master’s degree there were many concepts and methods she was learning and figuring out on her own, but once she began WGU’s M.A. English Language Learning (PreK-12) program she was able to conduct more research and learn best practices for working with ELL kids.

Earning a master’s degree meant a pay raise, but it has also opened up opportunities for Diane to teach at a college level and continue earning an income once she officially retires from teaching elementary school.

When asked what the most challenging aspect of being an ELL teacher and her current position is, Diane said, “Serving two schools. I work with 70 students between the two schools and serve two sets of faculty.” She wouldn’t have it any other way though. Along with teaching, Diane holds training sessions for other teachers in her two schools on how to better help ELL students. She has also trained many local college students on how to work with ELL students because they do not have classes on the subject.

Having the opportunity to work with the same kids over many years is her favorite part of the job. “I really develop relationships with my students and their families,” she says. “The families depend on me to know what to do when working with administration and situations that may arise with their children. I also recently helped a mother of one of my students get a job through my recommendation. Even after the kids have left the program, they come back to visit.”

Diane was recently nominated and honored as a finalist for the Teacher Character Award at the Professional Oklahoma Educators Foundation’s Excellence in Education Merit and Character Awards Banquet.