How WGU is working to improve diversity in nursing. 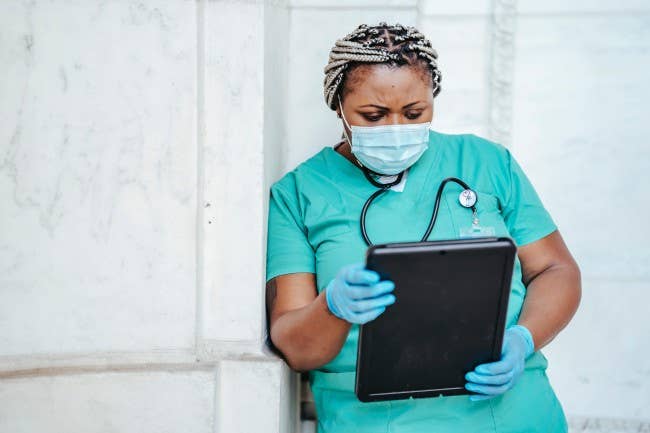 Does the field of nursing in the United States mirror the diversity of the patient populations it serves? The short answer is no, and there is still so much work to be done to change this. In a virtual panel discussion hosted in October 2020 by the Accountable Care Learning Collaborative (ACLC), Dr. Ernest Grant (President of the American Nurses Association), Dr. Jan Jones-Schenk (Senior Vice President–College of Health Professions, WGU), and Jason Thompson (Vice President–Diversity, Equity and Inclusion, WGU) shared their perspectives on barriers to equity in access and learning, and how the U.S. healthcare system must eliminate these in order to reduce racial disparities in care. One way is to improve diversity in the nursing workforce.

Advancing diversity in the U.S. health care system as a whole has been painfully slow. This is attributable to low numbers in underrepresented populations entering health care professions, the bias and discrimination that exists in learning environments for those professions, and a lack of reliable best practices designed to increase diversity. All of these matters were addressed during the ACLC podcast.

Findings in a 2017 National Nursing Workforce Study conducted by the National Council of State Boards of Nursing (NCSBN) shed light on how the number of minority and culturally diverse nurses is so disproportionate with a fast-growing minority population nationwide. The study was conducted as a national, randomized survey of 148,684 registered nurses (RNs) and 151,928 licensed practical/vocational nurses (LPN/VNs). Of the survey’s respondents who identified as minorities, 19.2% were RNs and 29% were LPN/VNs.

These low figures lie in stark contrast to national demographic statistics cited in a report published by the National Institutes of Health. They include predictions of “a rapid growth in racial/ethnic minority populations by 2060” and projections that the U.S. will become a never-before-seen “majority-minority nation” by 2043. The low numbers of racial/ethnic minority nurses during a time of booming minority populations indicates a problem that desperately needs to be fixed.

Cultural diversity is equally important when it comes to enhancing health care and nursing systems. The lack of that cultural diversity in the nursing workforce today demonstrates the same kind of problem as the lack of minorities does. Nursing practice should be culturally and ethnically representative of the world, and right now that simply isn't the case.

The only way to undo what WGU’s Thompson calls such “embarrassing” data and statistics is through uncomfortable conversations. “Let’s talk about race, let’s talk about gender,” he said during the podcast. “There’s an equation here that we should be honest about and intentional. [In order to solve the problem,] we’ve got to get uncomfortable and stay in that uncomfortable space.”

Dr. Grant, president of the ANA, addressed institutional racism as a prevailing cause of health inequity and that the nursing profession, though lacking in diversity according to the survey data, can mobilize around this issue. “As nurses, we have the responsibility to use our voice to call for change,” he said. “Our code of ethics obligates us as nurses to be allies and to speak up against racism, discrimination, and injustice.”

Diversity is not only about race and ethnicity. It means honoring the vast, rich tapestry of experiences, backgrounds, and perspectives providers bring to patient care. It is also about acknowledging that each individual is unique and recognizing that their individual differences create a richer, more valuable experience for all of us. In addition to race and ethnicity, a diverse workforce should encompass a range of people with different cultural and socio-economic backgrounds, religious beliefs, political views, and lifestyles. It’s important to reiterate that diversity also lies well beyond what the eye can see. For instance, diversity of thought is a valuable currency in healthcare. The wider the array of thinking, the greater chances of innovation—something that is always welcome and that ultimately stands to benefit everyone.

Cultural diversity means looking beyond gender and ethnicity, and takes into account background and lifestyle. In nursing practice and in the workforce, cultural competence is vitally important to ensuring patients are given fair treatment. RNs need to understand culturally appropriate discussions, and having nursing professionals who have that cultural background can dramatically help other RNs gain that cultural competence.

Advancing diversity in the nursing workforce is vital to our healthcare system in a multitude of ways. Research shows that patients from diverse backgrounds had better outcomes when in the care of nurses of their own race or ethnicity.

A review by the U.S. Department of Health and Human Services found:

Providing broader access to education is critical to increasing diversity in nursing.

Online universities like WGU are focused on giving more access to education to all kinds of students, regardless of background. WGU’s equal-opportunity, competency-based education model allows students to do their coursework on their schedule and utilize their past education and experience to excel. They can move through programs as quickly as they master the material. When we expand access to education, we create equity for all. Faculty are dedicated to improving cultural competence and working with culturally diverse students to ensure they get the education that is needed to benefit the healthcare industry.

WGU also believes that nothing should stand in the way of students achieving their education goals and improving their career opportunities. Our robust scholarships program is one of the many ways WGU removes the obstacles in a student’s path to success. Scholarship and federal funding are vital in helping all different kinds of students access education. If we want to improve diversity in healthcare, more students need scholarships and financial aid opportunities that will help them be able to pursue the degrees they need.

As the ACLC podcast panelists would agree, an enormous deal of work needs to be done in advancing diversity and combating inequities in the nursing field. Understanding and talking about the problem is the best way to bring it to light, and find ways to solve it. Diversity is ingrained in WGU’s education model and intrinsic to the culture of our organization. So it’s a matter we take very seriously and are determined to improve upon for the benefit of our students, our staff, and society at large.

“We have to declare our commitment through action,” said Dr. Jones-Schenk. “We’ve taken some early steps by asking our students, faculty, and alumni to raise visibility on unjust or questionable practices in teaching and learning … We’ve started analyzing student outcomes to see where inequities exist ... All of these steps are entirely insufficient, but they are a start.”

4 ways to become a nurse leader.

In fast-paced, high-stakes environments, it takes a lot to stand out and climb that ladder.

How one nurse built a global nursing career.

From emergency nurse to running his own multi-million dollar company. This is Jeff Solheim's story.

Remote nursing jobs: working from home as an RN.

Learn more about remote nursing opportunities and how you can be prepared for this career.