When will you see ROI from a college degree? 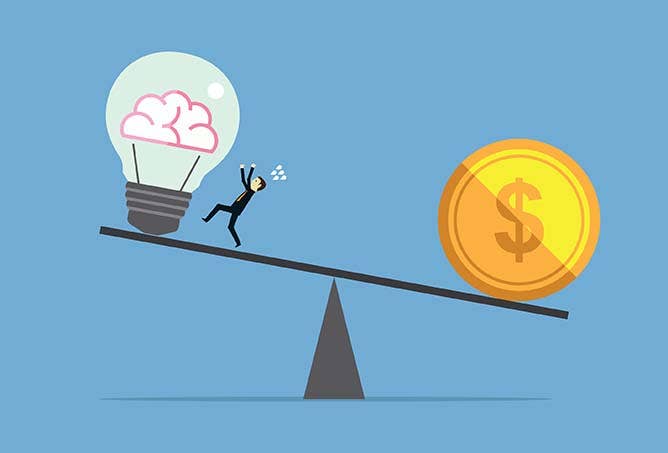 In today's global information economy, a degree is more important than ever. And by nearly every measure, earning a college degree is worth it.

If you're thinking about going to college to earn your degree, it's fair to ask how long it'll be before you earn more money, get a promotion, or land your dream job. Although the benefits of earning a college degree are often framed as long-term or intangible—like better retirement savings or greater personal well-being—many graduates see a concrete return on their investment in just a few years.

The ROI of a college degree.

According to a 2019 Western Governors University-Harris Poll survey, many WGU graduates see a full return on their tuition investment in less than three years. The majority of WGU students are 26 years old or older and working full time, and the poll found that, on average, WGU grads boosted their pre-enrollment salary $11,800 within two years of earning their degrees. After four years, grads were making, on average, $20,300 more per year than they were before enrolling.

Further reading: Going back to college when you have school debt.

How much you invest directly affects the return on your investment, and comparing desired salary increases to what you expect to pay will help you determine how soon you'll start to see a return. For example, at WGU, where tuition is about $6,500 per year for most bachelor's degree programs and is charged at a flat rate per term, students complete their programs in, on average, about 2½ years—so a full bachelor’s degree costs about $16,500, on average. You’d want to do a bit of research around what a degree could potentially do for you in terms of increased salary and determine how long it would take for possible salary gains to offset the cost of tuition and fees.

It’s important to understand that the numbers cited here are averages and estimates, so be sure to carefully account for your unique circumstances, and seek out the advice of career and financial experts to get the most accurate outlook on the potential ROI of a degree.

The positive pay pattern for degree-holders isn’t always contingent on a major promotion or career change. According to a report from the Georgetown University Center on Education and the Workforce, employees who continue their studies usually make more money, even when they keep the same job. For example, accountants and auditors with bachelor's degrees, the report found, earned about $900,000 more over a lifetime than accountants and auditors with just a high school diploma. The Federal Reserve Bank of New York puts the lifetime earnings difference at more than $1 million.

Earnings are important, but there are other benefits of earning a college degree. Degree holders are 24 percent more likely to be employed than high school graduates, according to the Lumina Foundation, and they're more likely to have reliable health insurance and retirement plans.

There are less tangible benefits, too. According to the Gallup-Purdue Index, WGU grads are more likely to be thriving in four of five well-being elements: purpose, social, financial, and physical well-being. And there's some evidence that college graduates are more civically engaged: bachelor's degree holders are more likely to vote in elections, volunteer, and donate to charities, according to the Association of Public and Land-Grant Universities.

And if you're already employed, you might be in a position to more quickly see the benefits of earning a college degree. Having some experience in the workforce before earning a degree always helps, and having your foot in the door at a company or connections within an industry will give you an extra advantage when asking for a promotion or raise.

Working toward a degree.

You don't have to wait until you graduate to showcase your new professional assets when interviewing for jobs or pitching a promotion to your boss. Even as you're working toward your degree, you can still put your college education on your résumé and leverage it to land a new job or a raise. And the emergence of micro-credentials like certifications (and the fact that some institutions, like WGU, are starting to “stack” them into some degree programs) is another way higher education is increasingly providing incremental value that can be realized more quickly than the time it takes to graduate.

Whether you’re still early in the process of pursuing a degree or just need a few more credits to finish, there are potentially big benefits to diving into a degree program. So explore the salary averages in your field, talk to people in the roles you’re interested in, and reach out to a WGU Enrollment Counselor to get a clear sense of what a degree could mean to you.

Here's some personal finance advice that can hopefully help you stay afloat while you ride out this crisis.

How to find a job during a recession.

Learn what things you can do to find a job during a recession and make yourself a competitive applicant.

The benefits of a master's degree: the new norm?

Earning a master's degree could quickly become a requirement for many jobs, not just a preference.