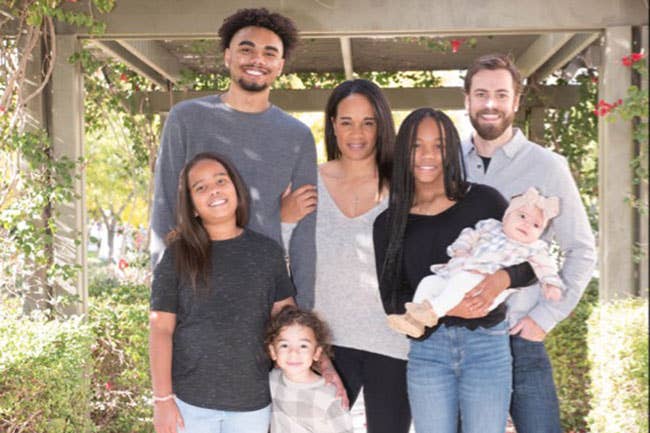 For several decades, women have been striving to change their role in society and the workplace. In honor of Women’s History Month, we’re amplifying the stories of remarkable women who are making an impact at WGU—and beyond. Mitsu Frazier is one of them.

Before her role as VP of Operations for the College of Business at WGU, Mitsu was a WGU student herself, earning her Master of Business Administration at WGU.

“As a woman in the workforce, the full story is often complicated,” she said. “Being a wife and mother, it can feel difficult to wear the hat of a leader and team member on certain days. It’s in these hard moments I’m reminded that those are just a chapter, not the whole story … and we can do hard things.”

Mitsu recalls one of those hard things was balancing work and motherhood during the pandemic.

“As many of us experienced, the pandemic created new realities at home and at work. For me, there was a moment not too long ago in which our fifth and seventh graders were going to school from home. In addition, we had an almost-two-year-old with no childcare due to the pandemic. I recall vividly trying to figure out a seventh-grade math problem while holding the baby and listening for ‘my turn’ on a meeting here at WGU,” she said. “I remember putting the baby down and begging him to just sit for a minute, trying to pull my hair out of a ponytail, and sitting down to launch into the details of our student outcomes with our executive team. When I finished and hung up there was this fleeting moment where I felt simultaneously on top of the world and near tears due to being so overwhelmed. I was so focused on how hard it felt for me and how easy it looked for others. It was then that I got a message about how well the presentation went, and I remembered that we rarely know the full story of what people are going through.”

While her career journey didn’t start in education, Mitsu says she’s always had a passion for helping students thrive.

“I feel a strong sense of connection to our alumni and recognize the hard work and effort it takes to earn a WGU degree while balancing life and other priorities,” she said. “I’m also regularly reminded when I hear from our students that we often only know a small part of the larger story of their lives, and if we can be anything, we can be kind, compassionate, and supportive in their journey to earning a degree.”

Mitsu says she’s able to relate to students’ challenges because of her own experience growing up as a woman of color.

“I was raised the daughter of a traditional Japanese mother and a Caucasian father. I was often the only female of color throughout my educational and personal life as I grew up in a state with less than 1% of the population that looks like me. Because I was considered different, I was often underestimated,” she recalled. “I often witnessed surprise during interactions with individuals about my personal and professional life. There were times in my life that that surprised, upset me, or even made me bitter. But there have been other times where the surprise has been my catalyst and my motivation. More than anything, I’ve learned that I remain the single person who’s able to choose my reaction to others, and that’s the greatest certainty in a world that’s often unsure.”

Mitsu’s drive for student success shows. During her 14 years at WGU, she’s led faculty and operational functions with a vigor for improving the lives of others through individual connection and mentoring. Under her leadership, WGU’s College of Business has supported 40,000+ graduates across undergraduate and graduate programs and has helped to increased enrollment exponentially.

While it’s safe to say that women have made major strides in the workplace over the last hundred years, Mitsu believes we still have a long way to go.

“I like to think about women’s history as something that’s revered all year, not just in March. That said, we should recognize that the gender gap continues to be far too wide—especially for women of color. There are things we can do to close the gap, including investing in female leadership, committing to offer paid family and medical leave (WGU is an example of doing the right thing in this regard), and removing salary history as a determination for starting salaries for new employees.”

Learn how WGU gave Cesar Zayas the wings to get promoted in the Air Force.

Get on the path to changing your career with the help of college, networking, and more.