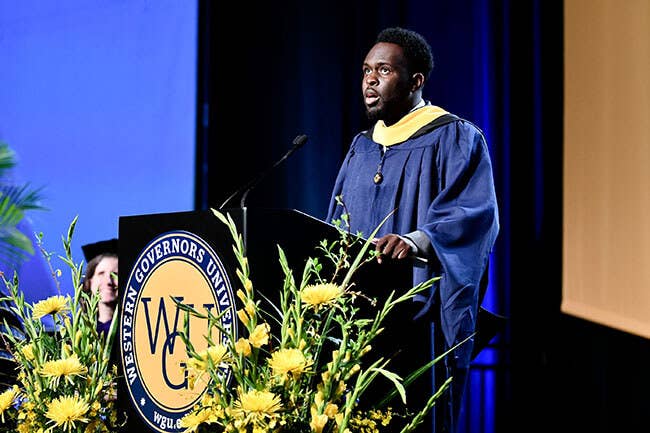 SALT LAKE CITY — As a high school dropout, Rashaan J. Green from Ellicott City, Maryland, had to overcome multiple barriers to pursue higher education. Now a successful IT professional with his master’s degree, Green was recognized for his achievements at the annual conference of the Council of Adult and Experiential Learning (CAEL) in Cleveland, Ohio, as the 2018 Adult Learner of the Year.

“As a high school dropout and GED recipient, I never imagined in my life that I would be receiving an award for my commitment to furthering my education,” Green said. “Knowing that there are many adults who overcome barriers in higher education, I was honored to be recognized.”

Green grew up in the projects of Charleston, South Carolina. Diagnosed with ADHD in his younger years, he was seen by his teachers and peers as “a troubled kid.” He spent much of his childhood believing those dismissive words and struggled through grade school until he finally dropped out of school in the ninth grade. Green spent years as a dishwasher in restaurants before realizing that he wanted to expand his opportunities. Motivated by his mother, who worked full time and attended college while suffering from lupus, he enrolled in Job Corps. Within five months, he had completed his GED, earned a certificate in computer repair, and secured a decent job in the industry.

Determined to go even further in his career, Green knew that he needed to take the next step and earn a college degree. He was accepted to Western Governors University (WGU) and thrived in its online, mentor-supported model. “I strongly believe that without WGU’s competency-based platform and the support I received, I wouldn't be where I am today in my career and personal life,” said Green, who earned his bachelor’s degree in IT Management in 2014.

Juggling both work and school, Green gained confidence when he held his own in job interviews where he competed with peers from Ivy Leagues schools. Shortly after earning his bachelor’s degree, he enrolled for his master’s degree in cybersecurity and information assurance, again at WGU. As a result of his hard work, and his two degrees with built-in industry certifications, Green was promoted to Cybersecurity Manager at Northrop Grumman in Washington, D.C., which doubled his salary.

“Rashaan’s story of determination is exemplary and shows how the power of education and degree attainment can open doors, improving the lives of individuals and families,” said WGU’s Chief Academic Officer and Provost Marni Baker Stein, who attended the conference in support of Green. “Stories like Rashaan’s remind us why it is critical for higher education institutions to provide flexible pathways to dedicated adult learners.”

Green’s story continues to inspire others. He was selected to speak as a graduate speaker at WGU’s February 2018 commencement in Orlando, Florida. Green is proof positive that it’s never too late to go back to school. To learn more about his story, which is featured in the #ShareWGU campaign, visit www.wgu.edu/inspire/rashaan-green.

Established in 1997 by 19 U.S. governors with a mission to expand access to high-quality, affordable higher education, online, nonprofit WGU now serves more than 110,000 students nationwide and has more than 129,000 graduates in all 50 states. Driving innovation as the nation’s leading competency-based university, WGU has been recognized by the White House, state leaders, employers, and students as a model that works in postsecondary education. In just 21 years, the university has become a leading influence in changing the lives of individuals and families, and preparing the workforce needed in today’s rapidly evolving economy. WGU is accredited by the Northwest Commission on Colleges and Universities, has been named one of Fast Company’s Most Innovative Companies, and was featured on NPR, NBC Nightly News, CNN, and in The New York Times. Learn more at www.wgu.edu.