WGU students Casey Jenkins and Stephen Allen were recently chosen to receive the CompTIA Education Foundation’s CompTIA IT Merit Award Scholarship. We asked them to give us some insight into their experience and advice for online learning. This is what Stephen had to say:

WGU: What is your background?  How and when did you decide to enroll at WGU?

Stephen Allen: I began my college education in 2001, immediately after high school, in hopes of finding a career in the information technology field. I started out with a degree program at my local community college, but later decided that I needed some real-world experience before completing my degree. In 2004, I enlisted into the U.S. Army as an information systems specialist. I completed four years of service and two combat tours in Iraq. Not long after returning to civilian life, I continued working toward the completion of my associate’s degree at a community college. 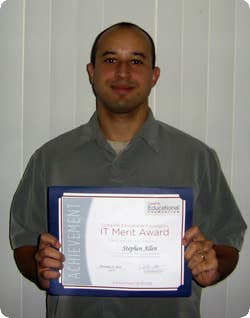 As I was nearing the completion of my program, my community college started offering a new, four-year computer science degree program. I was very interested, but as a father of three (to a newborn, a toddler son, and a daughter entering middle school) there were simply no options for fitting that bachelor's degree program into my life. I soon discovered WGU among a number of other schools, and decided on WGU after learning more about the school.

WGU: What are the advantages of an online university such as WGU?

Stephen Allen: WGU provides a degree of flexibility that few –if any –other schools can provide. This is especially important for individuals with irregular schedules, such as deployed military soldiers, two-income working families, and for anyone else who has anything else active in their lives beyond school.

WGU: What is some memorable advice that you have received in your life with regards to your career and succeeding?

Stephen Allen: I think that might be summed up from an Andrew Carnegie quote an old staff sergeant once kept up on his team message board: "You can close more business in two months by becoming interested in other people than you can in two years by trying to get people interested in you."

WGU: What is your daily inspiration to the best student you can?

Stephen Allen: My children are the best inspiration I have. I get to see them every single day, before school and after. I don't think there's a day that goes by where they don't do something silly, nice, or something else that makes me smile. I'm reminded every day that I'm not just earning this degree for myself.

WGU: How has being a student at WGU affected your life?

Stephen Allen: Being a student at WGU has given me the flexibility to be able to continue my education while continuing to care and provide for my family. The flexibility of courses has allowed me to find my own time to study beyond the scope of each, conduct extra research, and acquire better insight into my field and

WGU: What is your favorite thing about being a WGU student?

Stephen Allen: WGU has been my first experience with an educational institution in which every person I've established contact with –from the student and course mentors, to the administrative staff –seems to enjoy what they do for the students. I've had relatively few issues during my time attending WGU. For the few issues I encountered (financial aid, veterans benefits, etc), the person on the other end (of the phone or email), was always straight-forward and supportive.

WGU: Are there any online tools or research tips you can give to readers who are thinking about, or are currently enrolled in, our online university?

Stephen Allen: Before enrolling in any school, make sure that the accreditation is listed and recognized by the Department of Education (www.ope.ed.gov/accreditation/). This is the easiest way to distinguish a genuine school from a diploma mill. For those in the military who are eligible for the old (Ch.30) and new Post 9/11 G.I. Bill®, be sure that you're choosing the best option! I found the older G.I. Bill to provide a greater benefit with WGU.

We would like to thank Stephen for allowing us to interview him.

GI Bill® is a registered trademark of the U.S. Department of Veterans Affairs (VA). More information about education benefits offered by VA is available at the official U.S. government Web site at www.benefits.va.gov/gibill.