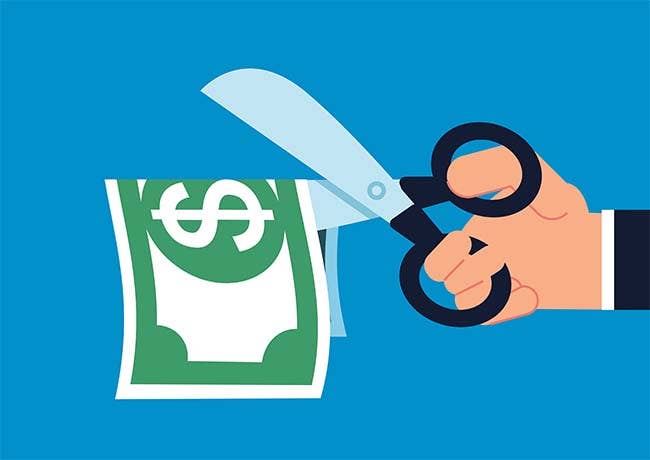 Everyone wants to make more money at work, right? Who’d ever think that making less is a good idea?

But sometimes, taking a pay cut could be a means to a more prosperous and meaningful end. Other times—like right now—it’s hardly a choice. The pandemic has “plunged the global economy into a deep recession of historic proportions,” NPR recently reported. Almost 21 million U.S. workers have been unemployed since the coronavirus outbreak hit our shores, noted The New York Times. Millions more have been furloughed or have taken pay cuts to avoid mass company layoffs.

With so many people transitioning into various compensation situations, it’s important to recognize that a pay cut is not voluntary. But this is also an opportunity to take stock of your own professional pathway and make a plan that will help you emerge stronger from these unprecedented difficulties.

Maybe you work in IT and need to upskill to make the jump from your company’s IT help desk to the higher-paying DevOps team. Maybe your company just asked all employees to take a two-week furlough or it’s downsizing during an economic downturn. Perhaps you want to go part time to spend more time with your family or further your education. Or maybe your current gig is just plain making you miserable.

Unless you won the lottery or somehow stumbled into a blank check from a billionaire’s bank account, you’ll probably never know exactly when to take a pay cut. It’s an especially daunting dilemma for workers who want to change their career paths. It’ll mean changing your lifestyle, at least a little bit. It will probably make it harder to save. And it could make your life more stressful, if you’re constantly going to be questioning whether you have enough money to make it to the end of the month.

That said, your career path is a huge factor to your personal satisfaction, so if your current situation isn’t making you happy, it might be time to start thinking about making a change for the long term.

Not all pay cuts are created equal, but if you’re considering taking a pay cut, you’ll need to weigh how much you’ll be losing against what you’re gaining in return.

For example, a 10 percent pay cut in exchange for half days on Friday or to work from home is a lot different from a 50 percent cut that could come in the early months of starting your new business. But if flexibility will give you more time with family and more time to turn your side hustle into your main moneymaker, then maybe a 10 percent pay cut comes as an easy trade-off. If your dream job is to be your own boss and you have an unshakeable vision for self-employed success, then perhaps that 50 percent pay cut will be easier to stomach during that transition period.

If you have plenty of savings, it might be far easier to take the risk of trading financial security for satisfaction. But long-term factors play a huge role in most people’s decisions. A 2016 Fidelity survey found that workers ages 25 to 35 would take an average pay cut of $7,600 if they could have more career-development opportunities or find more meaningful work.

Cons of a cut.

There are, of course, disadvantages to taking a pay cut—some of them obvious, others less so.

It comes with some sobering risks, according to personal finance site Money Crashers:

· Less financial flexibility. Most Americans are already struggling to save, so a pay cut, even if it’s in the short-term, could further jeopardize these efforts.

· Feelings of inadequacy. Researchers found that workers who took wage cuts, and whose peers didn’t, had lower morale, according to NPR.

Waiting for the payoff.

If you’re changing careers, one of the biggest questions likely swirling around in your head is how long it will take you to work back to—and then exceed—your previous income. It’s unreasonable to expect a comparable salary when entering a new industry, HR expert Trellis Usher tells Forbes; she says to expect an 18- to 24-month wait before a significant pay bump. Forbes also noted that an early-career professional took a $17,000 pay cut and walked away from her annual bonus at her low-growth company to join a startup. The switch, she said, led to more opportunities, new skills, and—after only a few years—double her old salary.

It could, of course, take years to recoup your salary. An investment banker quitting to become a program officer at a nonprofit might have to say goodbye forever to their old lofty salary. But if you’re taking a pay cut to pursue an opportunity that you’re passionate about, you shouldn’t have to wait long to see the payoff, whether it’s financial or personal.

Take a chance on a new career.

Pursuing a degree can set you up for success in a new career.

The best times of the year for job searching.

Generally speaking, there are overarching seasonal tendencies that you should be aware of in your job hunt.

Luckily, a new year brings a new opportunity to wipe the slate clean and start fresh.